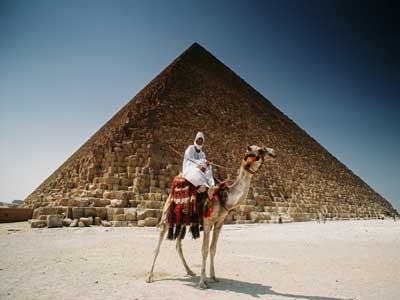 It makes sense that Eskimos have an extensive list of words to describe snow. Snow dictates their way of life and is linked inextricably to their identity in and outside of their culture. On the other side of the world, where snow never falls, nomadic bedouins in the Saharan region show a similar verbal variety in regard to camels. When referencing the tawny mammals, desert-dwellers have more than 700 related words at their disposal.

If you compare bedouins to cowboys of the American West, camels are ostensibly the horses and cows of the desert. The long-lashed ungulates (hoofed animals) provide transportation, fuel (from their excretions), nutrition and material for clothing and shelter. Even in the harsh desert environment, camels can haul heavier loads across short distances than what elephants can carry [source: Simmons]. Able to travel between 25 and 30 miles (40 and 48 kilometers) per day, camels won't get you anywhere fast, but perhaps more importantly in the scorching conditions, their engines won't break down along the way.

­Considering their distribution in northern Africa, southwestern Asia and the Middle East, it may surprise you to learn camel predecessors originated in the Western Hemisphere, and the camel's family tree includes llamas, alpacas and vicuñas. Equipped with ears and nostrils that can shut tightly to block out sand, camels are cud-chewers, dining on the sometimes scarce plant selection in lowland steppes, grasslands and desert climates. Look closely at their feet, and you'll notice they have broader hooves than horses, which allow camels to effectively distribute the heat from the toasty ground and walk through the sand more easily [source: Simmons].

Of course, you can't talk about these animals without saying a few words about how camels store water and their signature humps. The easiest way to tell the two camel species apart is by counting the number of humps. Dromedary camels, which are the more abundant species, have a single hump; Bactrian camels have two. If you were to slice off a hump from a healthy camel and put it on a scale, it might weigh up to 80 pounds (36 kilograms).

So, that's an 80-pound (36-kilogram) hump filled with water, right? Quite the opposite.