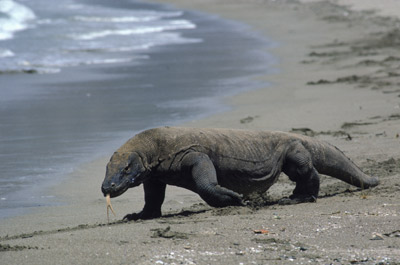 In June 2008, five scuba divers were carried away from their dive boat by strong currents and stranded. When they finally made it to land after 12 hours adrift in shark-filled waters, they must have thought they were home free.

As it turns out, the land they made it to was Indonesia's Rinca island, one of the last remaining homes to wild Komodo dragons, and the divers' relief was short lived. They spent the next two days throwing rocks and screaming at a Komodo dragon that appeared on the beach. They successfully kept it at bay until they were rescued from the nearly deserted island.

The world thought Komodo dragons were mythological until about 1911. During World War I, a plane crashed near Komodo Island, and the pilot survived to tell the world about the Komodo dragon [source: Honolulu Zoo]. He, like the divers, was very lucky.

Komodo dragons (Varanus komodoensis) live up to their fierce reputation. They will attack and devour a human being unprovoked [source: BBC News]. They're part of a group of lizards known as monitors, and they're the biggest lizards in the world. The largest Komodo ever measured was more than 10 feet (3 meters) long and weighed 366 pounds (166 kilograms) [source: UKTV]. The average size in the wild is about 8 feet (2.5 meters) long and 200 pounds (91 kilograms) [source: Honolulu Zoo]. To get a feel for how powerful this creature is, consider that when a 120-pound (54-kilogram) Komodo in the London Zoo needs a blood test, it takes two people to hold down its tail [source: BBC News].

Many scientists think the record 366-pounder may have eaten a big meal just before weighing in. A Komodo can consume about 80 percent of its body weight in 20 minutes [source: Honolulu Zoo]. It can swallow huge pieces at a time because its jaw and skull are flexible, like a snake's. Komodo prey includes chickens, wild boar, deer, goats and animals as big as water buffalo. On occasion, it'll take down a human. The Komodo is the only lizard that will attack prey bigger than itself. It also regularly attacks other Komodo dragons. About one-tenth of the Komodo diet is other Komodos [source: Honolulu Zoo].

There aren't many animals that can survive a Komodo attack. A human and another Komodo are pretty much the only ones. This endangered animal, down to about 4,000 in the wild, is at the top of the food chain in its habitat [source: Honolulu Zoo].

What is it that makes this lizard such a good predator? Find out next.

In May 2006, a Komodo dragon in the United Kingdom’s Chester Zoo laid eggs without ever having contact with a male. It was the first known occurrence of parthenogenesis (virgin birth) in the species [source: UKTV].