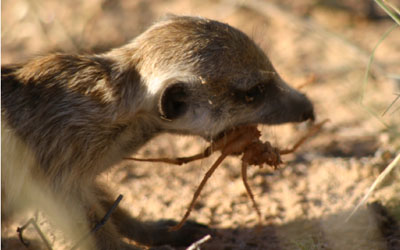 Scorpions have crawled largely unmolested across the Earth for millions of years, but they've met their match in at least one certain species who loves to dine on them. See more meerkat pictures.
Oxford Scientific Films

Behold the mighty scorpion: ancient, poisonous monster of the Earth. Scorpions were among the earliest species to leave the oceans and emerge onto land. They left the sea in pursuit of their fishy prey, which had recently begun to grow limbs to become the first amphibians.

For 430 million years, the scorpion has crawled over rock and soil -- even high mountains -- changing little except to adapt by growing smaller over the eons [source: University of Arizona]. The species has sustained its existence for such a protracted length of time in large part because of the deadly venom it deals to prey and predator from its vicious, stinging tail. In some scorpion species, the right dose of venom can even fell a human.

­The scorpion's venom is a mixture of neurotoxins. Once introduced into the victim's bloodstream, these toxins attack the central nervous system. Victims may convulse and froth at the mouth. They may lose control of their extremities; their eyes may dart about involuntarily, and their hearts and respiratory systems may become paralyzed, leading to death.

If a scorpion can kill a human, what kind of match would, say, a meerkat be for the deadly arachnid? Let's find out. Here comes a meerkat now, traipsing across Africa's Kalahari Desert.

As the meerkat approaches, the scorpion senses its presence through pectines, tiny structures on the underside of its body. These sensors pick up even the slightest vibrations. The scorpion knows the meerkat is near; its tail raises, ready to strike.

The meerkat sees the scorpion. It stands on its hind legs and sizes up the deadly threat. The meerkat hops a little closer, perhaps dangerously close, to the scorpion. It doesn't look like this is going to pan out well for the meerkat. The scorpion fully raises its tail to sting. Here it comes. Wait!

Without warning, the meerkat suddenly grabs the scorpion with its forepaws, bites off the stinger, drags it through the sand and chomps into the body. After a few nibbles, the scorpion stops squirming. The meerkat finishes its food and hops off.

What just happened? The meerkat should be dead as a doornail. Why isn't it? Find out on the next page.