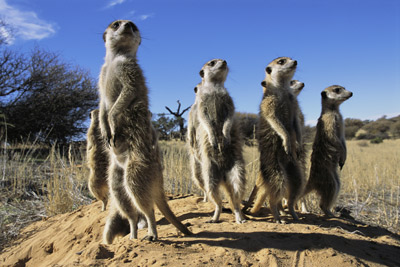 ­If you've seen Disney's "The Lion King" or Animal Planet's "Meerkat Manor," you're familiar with the celebrity meerkats. And whether your favorite is the animated Timon or one of the reality TV families (Whiskers clan, or otherwise), it's hard not to fall for these small, social mammals.

But just like Hollywood celebrities, it's best to appreciate meerkats from a distance. According to a law called the Lacey Act, any wildlife (wild mammals, birds, and fish) that isn't native to the U.S. can't be brought here. Meerkats live in the Kalahari Desert, spanning across South Africa, Namibia, Botswana and Angola, which makes it illegal to keep them as pets in the U.S. without specific permits and licenses [source: Kalahari Meerkat Project].

If you make it that close, you'll notice that meerkats (or Suricata suricatta) are about the size of a squirrel, although they're actually relatives of the mongoose. They have only four toes on each foot, and they stand about 10 to 12 inches tall. Meerkats have 8 or 9-inch slender, tapered tails, and they weigh about two pounds. The color of their coats varies depending on the climate in which they live: It can be gray, tan or brown, sometimes with a silvery tint, and with darkly colored bands across their backs.

Meerkat ears and eyes have special features to keep the sand out. They're able to close their ears, and their eyes have a membrane -- called the nictitating membrane -- that removes sand with a blink. Their eyes are also darkly rimmed, which reduces glare and enhances their vision in the bright desert sun.

On average, meerkats live 10 years. Can you imagine a decade-long grub diet? Next, we'll learn about meerkat cuisine, habitat and predators.