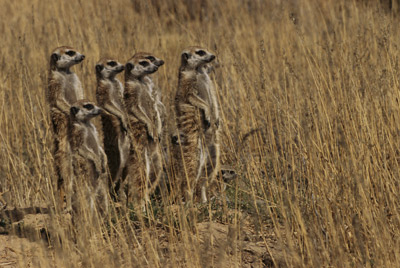 A group of meerkats stands guard in a field as others forage.
Mattias Klum/National Geographic/Getty Images

Primarily, meerkats are insectivores, which means most of their diet is made up of insects. However, they won't turn down a meal of small mammals, snakes and snake eggs, birds and bird eggs, grubs (an insect's wormlike larva) and even poisonous scorpions (they've perfected the scorpion hunt to avoid the venom).

Meerkats spend a significant part of the day foraging for their food with their sensitive noses. When they find it, they eat on the spot. Their diet consists of roughly 82 percent insects, 7 percent spiders, 3 percent centipedes, 3 percent millipedes, 2 percent reptiles and 2 percent birds [source: University of Michigan]. Depending on what part of the Kalahari Desert meerkats call home, water can be scarce; but at the very least, it can be found in tubers and roots.

Meerkats are territorial and the size of their land depends on the size of their pack and the quality of local food and water foraging. They're transient by nature and move when their food supply becomes depleted or they're forced out by a stronger gang. The group's dominant male, the alpha male, marks the group's territory to protect the boundary from rivals and predators.

Burrows are created as homes in the sand across this territory. Meerkats work collectively to build and renovate their homes through excavation. These burrows are elaborate underground quarters. Although meerkats are capable of setting up house themselves (their sharp, nonretractable claws are well-suited for digging), they often share the work and the dwelling with African ground squirrels and the yellow mongoose. Meerkats will also share their burrows with beetles -- a type of species they don't have a taste for -- that are content to eat any waste the meerkats leave behind.

Meerkats enter and exit their burrows through several scattered holes in the ground. A labyrinth of tunnels connects dens and other entry holes. Dens are used for protection, sleeping and breeding. Bolt-holes are a sub-system of entrances and tunnels created around the territory and used as safe houses or escapes when danger arises. These holes are especially helpful when the meerkat pack is foraging away from the primary burrow entrances.

In addition to the bolt-hole system, meerkats use sentinels, or lookouts, to stay safe. One meerkat, rotating throughout the day, stands watch for approaching predators while the rest of the group concentrates on foraging or other daily activities. If a predator or danger is spotted, the sentinel lets everyone know through a specific bark, similar to sounding a siren or alarm. The meerkats have their own language, with specific calls used as alarms. It's quite an efficient system of predator detection: In one study, sentinels were able to detect predators more than 150 meters away 77 percent of the time, compared to only 44 percent detected by foraging meerkats [source: University of Cambridge].

Who are the predators? Meerkats are on the lookout for martial eagles, jackals, hawks, snakes and other competitive meerkat gangs. If trouble arises and the sentinel sounds the alarm, there are a few different techniques to dodge the danger, including running for the bolt-holes, fending off the attacker and covering babies, standing tall in alert stance, and mobbing the enemy. In ground conflict, defensive threats and mobbing make the meerkats seem large and intimidating. Mobbing meerkats rock back and forth while hissing and growling. But when enemies approach from the sky, meerkats most often seek protection in their burrows.

Meerkats live in cooperative social systems. Now let's learn more about their social structure and the different roles meerkats play in their community.

Check out more on meerkats from Discovery Channel's Animal Planet.