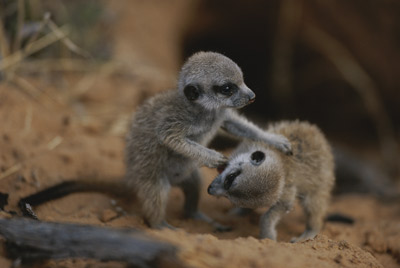 The alpha female meerkat is usually the largest female in the gang. She scratches and fights her way to the dominant position. She is the only female in the gang allowed to breed, and she breeds exclusively with the alpha male.

Meerkat society is one of cooperative breeding -- everyone pitches in to care for the young. When pups are born, they're hairless and unable to open their eyes or ears for at least 10 days. Nonbreeders take turns baby-sitting pups inside the burrow so the mother can forage for food. Pups won't emerge from the burrow until they're about three weeks old.

Elder meerkats are the educators. Meerkats rely more on mentoring than instinct when it comes to learning foraging and danger detection. Pups are weaned and become integrated into the group by the time they're a month old. But for their first three months, they don't yet know how to handle prey and find food so their baby-sitters continue to feed them.

Adults and pups all participate in play fighting. Young meerkats play fight to learn and to practice their skills, while adults use it to establish dominance within the gang.

Although the dominant female is the only female allowed to breed in the meerkat community, she's responsible for only 80 percent of litters produced [source: National Geographic]. Meerkats reach sexual maturity right around their first birthday, and some beta females will become pregnant before leaving the gang. Males initiate sex with females year-round by fighting with them. After a pregnancy of about 11 weeks, the female delivers a litter ranging from two to four pups [source: Honolulu Zoo].

When a beta female has babies, there are a few scenarios that can play out. The pups from the nondominant meerkat may be concealed and raised alongside other pups in the burrow. However, the likelihood of this is small, and researchers have learned that meerkats often practice infanticide. In an effort to maintain dominance and secure the most resources for her own babies, pregnant alpha females sometimes kill pups born to beta females. On the flip side, subordinate females may kill the alpha female's litter -- as well as pups birthed by other beta females -- in order to maximize the chance of survival and quality of care for their own young [source: National Geographic]. Researchers call this the dark side of cooperative breeding.

The Widespread Mourning of Flower

Flower's mourning spread fast and far. Shortly after her death, U.P.I. issued her obituary on its wire service. Fans wrote condolences to the network and on online message boards. Hundreds of tribute videos were created and posted to YouTube. Flower was called a queen and the Kalahari Desert Rose.