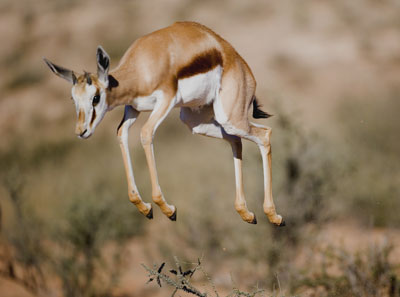 You'd think being able to run 40 mph (64 kph) would be fast enough to outrun any problem. But if you live in the open plains where one of the top predators is a cheetah that can accelerate from 0 to 60 mph (97 kph) in three seconds, you're­ going to need a few more tricks in order to stay alive.

Gazelles, medium-size antelopes that live in Africa and Asia, have done just that. Although it's doubtful any of the approximately 19 species of gazelles could win a race against a cheetah, some of them have gotten pretty good at convincing the powerful cat not to bother trying to take them down [source: National Geographic]. Gazelles may be a relatively silent and gentle bunch, but they are effective communicators nonetheless. From avoiding a chase to winning a mate, gazelles have a range of ways to communicate using only their bodies.

One of the most interesting examples of gazelle body language is stotting. Stotting, also called pronking, involves gazelles repeatedly jumping up into the air with all four legs held stiff and backs arched. They tend to stot before running away when they see an approaching predator, like the aforementioned speedy cheetah. At first glance, this behavior seems counterintuitive: Why waste precious time jumping up and down when you should be burning rubber?

Initially, biologists thought gazelles that stotted were altruistically warning the herd of an impending attack. While that may still be the case, another widely accepted theory is that they're also communicating with the predator. In a 1997 book called "The Handicap Principle," Amotz Zahavi suggested that some animals engage in costly signals as a way of reliably communicating their fitness level. The most famous example of this is the male peacock, whose extravagant tail requires extra energy to carry and display, but also earns him the most mating opportunities because it indicates how capable he is.

In the case of a stotting gazelle, it's as though the gazelle is saying, "Look at me cheetah, I'm so tough that I can afford to spend time jumping around because I'll still outrun you." The cheetah may assume that the gazelle is in good enough condition and that it's probably not worth its time.

Stotting is one of the rare instances when you'll find gazelles communicating with members of other species. Most of their communication is reserved for one another. 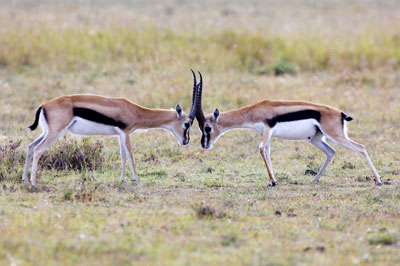 How do leopards kill animals larger than they are?
Elephants Have a Special Alarm Sound: 'Humans! Run!'
A Smart Lemur Is a Popular Lemur