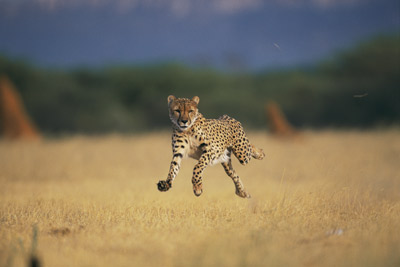 An African cheetah appears to fly -- if only for a second. See more big cat pictures.
Chris Johns/National Geographic/Getty Images

The cheetah is the fastest land animal, achieving a top speed of about 70 mph (113 kph) [sources: Blue Lion, Defenders of Wildlife]. This incredible speed comes with a price, though -- a cheetah is a rather puny large cat. (It looks a lot like a leopard, but you can tell a cheetah by the bilateral, teardrop-shaped stripes running from either side of its nose to its eyes.) It's small and lightweight, usually less than 3 feet (1 meter) tall and about 4 feet (1.2 meters) long [source: Defenders of Wildlife]. More than half of that length is the tail, which is crucial to maintaining control during a 70 mph chase. The very adaptations that make it the fastest cat alive also make it highly susceptible to extinction, as we'll see on the next page.

On the open savannas of Iran and parts of Africa, cheetahs are amazing examples of specialization -- the evolutionary adaptation to very specific environmental conditions. In this case, the specialization is for speed. Going after impalas, gazelles and small wildebeests, the cheetah is a blur, and the chase is short-lived, typically lasting about 30 seconds. Cheetah moms spend a lot of time teaching their cubs to chase, sometimes dragging live animals back to the den so the cubs can practice the chase-and-catch process.

When a cheetah overtakes its prey, it knocks it down and takes it out with a bite to the neck. It then eats as quickly as possible. If a lion comes along, the cheetah will abandon its catch -- it can't fight off a lion, and chances are, the cheetah will lose its life along with its prey if it doesn't get out of there fast enough.

Speed is never an issue, of course. Speed is how the cheetah survives as a predator that can't defend itself in a fight. And that speed is the result of some very special physical attributes. On the next page, we'll see how a cheetah manages its unmatched speed. 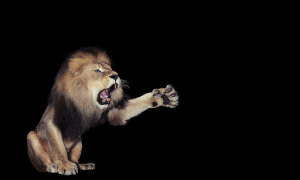 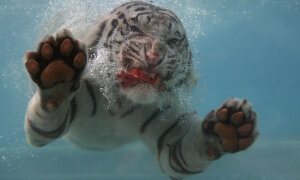