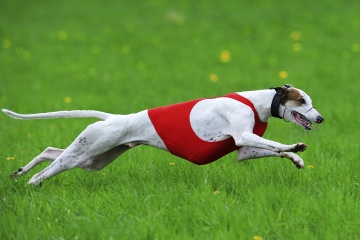 Greyhounds are impressive dogs, but their speed and athleticism is only surpassed by their immense laziness.
SakariLampola/Thinkstock

Because of their tremendous speed, greyhound racing is a popular spectator sport, drawing large crowds at racetracks around the country. Registered greyhounds generally race until the age of four before retiring, and many go on to live another eight years or more. Around 90 percent of racing greyhounds end up adopted by loving families -- their gentle nature and ability to take action and excitement in stride make these dogs great pets [source: American Greyhound Council].

If you're considering greyhound adoption, you may find yourself wondering whether you can meet the dog's exercise demands. After all, average speeds at the greyhound track typically reach 30 mph or more -- well beyond the ability of most humans [source: Erie Shore Greyhound Adoption of Ohio]. The fastest man in the world, Usain Bolt, has managed to almost hit 28 mph [source: Elert]. While this is an impressive achievement, even Bolt would be lapped by a greyhound traveling at its top speed of over 40 mph [source:Sciencedaily] So what's a dog lover to do?

Believe it or not, greyhounds are just as well known for their lack of motivation as for their natural speed. These animals are often referred to as the "45 mph couch potato." While greyhounds can run that fast, it is no indication that they actually want to do so on a regular basis [source: Greyhound Pets of America Minnesota]. Due to their innate laziness, there's absolutely no reason you should feel obligated to run with your greyhound. He'll likely be satisfied with a few walks a day and the opportunity to run off some energy in a fenced-in area every once in a while.

Of course, if you'd prefer to adopt a dog you can take on regular runs, a greyhound can handle a nice brisk jog about as well as other dogs if you give him some time to build his stamina. Keep in mind that the longest greyhound race tracks measure just 2,310 feet, or 7/16th of a mile. That means greyhounds are used to sprinting at top speed for very short distances. If you want him to jog around the neighborhood at a leisurely pace, you'll have to give him time to work up to your preferred distance [source: Greyhound Pets of America Minnesota]. The hardest part, of course, will be preventing him from sprinting ahead of you straight out of the gate, but given practice, any greyhound can learn to keep pace with his owner -- if you can drag him off the couch, that is.

10 Best Family Dog Breeds
The Lowdown on the Lion-like Leonberger
Why Do Scent Hounds Have Long Floppy Ears?