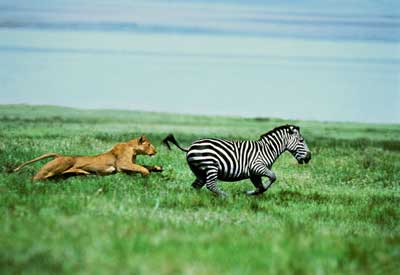 Man-eaters aren't limited to Hall & Oates' gold-digging temptress. Indeed, the king of the jungle has been known to develop a taste for human flesh, fueling stories of mythic proportions about lions wreaking havoc on groups of people in Africa.

But, like sharks, lions may be misunderstood when it comes to their not-so-friendly encounters with humans. In ideal situations, lions prefer to mooch off of other animals' hard work, scavenging carcasses for the bulk of their food sources [source: African Wildlife Foundation]. To supplement their diet, they seek out prey such as buffalo, gazelles and zebras. However, under certain circumstances that we'll learn about in this article, some lions will opt for human victims.

The most famous instance of man-eating lions occurred in 1898. Two male lions, later named Ghost and Darkness, unleashed a harrowing string of attacks on Ugandan railroad workers. The building project had reached the Tsavo River in Kenya, home to the now infamous Tsavo lions. According to the original reports, the lions slew 135 African and Indian railroad laborers, sometimes dragging the men from their tents while they slept. The violence escalated to the point that construction halted. After that, it took nine months for Lt. Col. John Henry Patterson to track down and shoot the two culprits, effectively ending the killing spree [source: Bernstein].

The Chicago Field Museum later purchased the lion skins from Patterson for a cool $5,000, where the lions now live in stuffed form. Upon deeper investigation into the Tsavo event, museum researchers found records for only 28 deaths [source: ­Holden]. Despite the lowered casualty list, the Tsavo lions maintain their reputation as the man-eaters of Africa, roaming the protected eastern area of the Kenya Tsavo National Park.

But the lions of the Tsavo region aren't the only ones to stalk large numbers of people. In the 1930s, the Njombe district in southern Tanzania suffered an estimated 1,500 deaths from lion attacks [source: Frank et al]. Since 1990, at least 600 people have died in Africa for the same reason [source: Frank et al].

If humans aren't an innate part of the leonine diet, what turns these beasts into man-eaters? Sink your teeth into the answer on the next page. 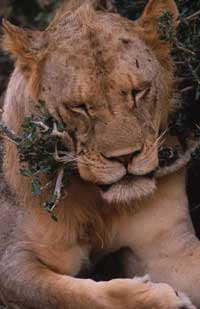 For related information on lions, visit the links on the next page.