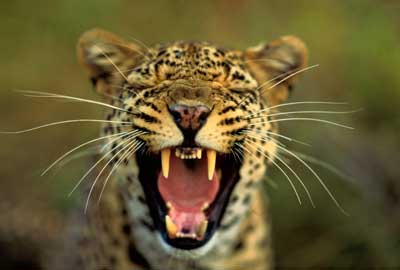 Humans aren't normally on the leopard's menu. However that didn't stop one from killing 125 people from 1918 to 1926 in Indian villages located within the Himalayas. See more big cat pictures.
Manoj Shah/Getty Images

From 1918 to 1926, a serial killer stalked villagers in a remote area of the Himalayas in India. Across a 500-square-mile (1,294-square-kilometer) region, 125 people died upon having their bodies savagely ripped apart and devoured. For years, residents put themselves on voluntary lock-down at night, scared to encounter the vicious murderer. In spite of such precautions, the killer managed to break into a home and take down a young boy [source: Sunquist and Sunquist].

The culprit would eventually be called "the man-eating leopard of Rudraprayag." The leopard, which had developed a taste for humans, was eventually tracked down and shot by hunter Jim Corbett. Corbett's feat was so appreciated by the Indian government that it named a national park in his honor.

As is the case with lions, man-eating leopards are the exception rather than the rule. In 2004, residents of Mumbai, India, experienced at least 12 leopard-related attacks. Surprisingly, wildlife officials didn't place the blame on bloodthirsty big cats. Instead, they attributed the incidents to too many people living near the Sanjay Gandhi National Park, home to around 30 leopards [source: BBC]. When human populations and animal predator populations collide, the former may naturally become the prey.

Normally, leopards prefer to dine on gazelles, antelopes and other ungulates (hoofed animals). Found in a variety of habitats ranging from tropical forests to mountains, leopards are most widely distributed in Southern Africa and Southeast Asia. However, due to poaching and deforestation, all leopard subspecies are classified as either endangered or threatened [source: San Diego Zoo].

These big cats are among the smallest in the Felidae family. Weighing in at an average 129 pounds (59 kilograms), leopards are half the size of lions and tigers. For comparison, adult tigers, the largest big cats, weigh around 500 pounds (226 kilograms). But what leopards lack in size, they make up for in strength. With specialized senses and anatomy tailored for hunting, leopards can occasionally slay animals up to three times their size [source: Schutze].

Leopards, which are known for their spotted coats, may sometimes be black. When this happens, we call the big cat a panther. In this case, leopards and panthers are the same species, just different colors. The name "panther" may refer to black cougars as well. 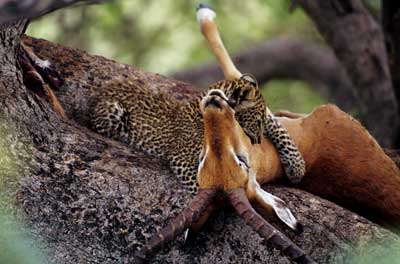