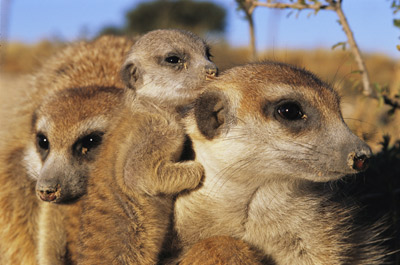 Meerkats don't live alone. They are social, diurnal (active during the day) animals who live in gangs of about two to 50 [source: Kalahari Meerkat Project]. They spend their days foraging for food, caring for their young and guarding their territory. And let's not forget grooming and napping. Meerkats brush and clean each other's fur with their claws and teeth -- and they've even figured out that their claws are a good substitute for floss. In the hot midday desert sun, meerkats are known to nap in the shade or in their dens, usually piled on top of one another.

The rulers of the group are the alpha male and alpha female, and every meerkat gang has a similar power couple.

Beta males voluntarily leave the community to become the new dominant males in another gang, or to form a new gang with unrelated females.

Now that we know about the meerkats' hierarchy, let's focus on their mating and breeding habits. Do meerkats know how to find food because of basic instincts, or do they rely on their elders to teach them the ropes? Find out in the next section.