What's the largest land animal of all time? 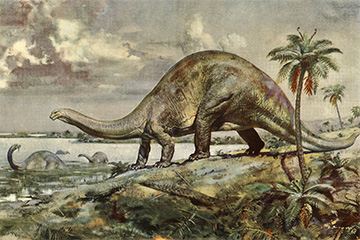 A titanic sauropod considers a dip in this mid-20th-century illustration by Czech artist Zdeněk Burian.
Lombard/ullstein bild via Getty Images

If there's an overall lesson to be gleaned from the prehistoric bestiaries of our childhood libraries, it's this: If you want to go extreme, go prehistoric.

For the most part, this nugget of wisdom holds true. If the world's contemporary biological diversity bores you, simply dig around in the fossil record till you find something more exciting.

Crave a rodent with horns? Boom! The Ceratogaulus gopher awaits you in its late Miocene burrow like some sort of demonic Beatrix Potter character.

Contemporary shark sizes just not cutting it for you? Then travel back a few million years and drive your Jet Skis clean through the gaping jaws of a 59-foot (18-meter) Carcharodon megalodon.

These and myriad other extinct monsters await your wonder, but prehistoric beasts don't always reign supreme. When it comes to pure size, the contemporary blue whale takes the krill-flavored cake. Weighing in at up to 200 tons (181 metric tons) and reaching lengths of 100 feet (30 meters), this leviathan stands unchallenged by every known creature in the history of Earth [source: National Geographic].

But don't throw away that bestiary just yet! Because if we limit our search to gigantic land animals, a handful of contenders arise from the dead eons of yore.

That's right, step aside modern elephants, because back in the Oligocene epoch the Paraceratherium long-necked, hornless rhino weighed as much as three of you. THREE OF YOU! On top of that, her formidable 16-to-18-foot (5-to-5.4-meter) shoulder height already challenged the full 20-foot (6-meter) stature of the tallest giraffe [source: Switek]. She had only to lift her long neck to shame our contemporary land giant entirely [source: Taylor and Wedel].

But to discover the true elephant-shaming kings of Earth, we have to venture back to the age of the dinosaur – specifically the preposterously proportioned titanosaur clade of sauropods. But which among these long-necked, long-tailed quadrupeds was truly the largest?

As you might expect, it's here we confront the inherent incompleteness of the fossil record. Just because a scale-busting sauropod existed, it doesn't mean it managed to die in just the right circumstances to wind up fossilized, much less discovered by a paleontologist and cast opposite Chris Pratt in a Hollywood blockbuster. The largest animal to ever live might never make its way into the human fossil record, and until time machines are up and running we have to be OK with that.

And just because we have fossil evidence of a gigantic dinosaur, it doesn't mean we have enough evidence to accurately calculate body mass or height. For instance, Amphicoelias fragillimus might have stretched an astonishing 190 feet (58 meters) from nose to tail, but the single incomplete fossil specimen emerged in the tumultuous world of late-19th-century bone-hunters and has been lost for decades [source: Switek]. All we have are sketches.

So we're left with a few well-documented titans and a slew of contenders with varying levels of fossil completeness. For instance, the ambitiously named Ultrasaurus emerged from a 1979 fossil dig in South Korea, but later proved to be chimeric – that is, mistakenly assembled from disparate fossil specimens. Proponents of Argentinosaurus have championed this estimated 77-ton (78,235-kilogram) sauropod as the largest dinosaur, but it all depends on a mere half-dozen fossilized vertebrae.

In 2014, Drexel University paleontologists made a discovery that, as of this May 2015 writing, makes the strongest case for the largest land animal of all time: a 70-percent complete fossilized skeleton of an estimated 85-foot (26-meter), 65-ton (59,300-kilogram) sauropod. Fittingly named after a type of early-20th-century battleship, Dreadnoughtus schrani would have boasted a body the size of a house and mass equal to an entire elephant herd [source: Drexel University].

But the fossil record, like our scientific understanding in general, is ever-expanding and ever-correcting. The Dreadnoughtus makes a strong case today, but what about tomorrow? What rough beast, its hour come round at last, slouches toward the paleontologist's chisel to be born?

Author's Note: What's the largest animal of all time?

As you can tell, I spent untold childhood hours perusing my collection of illustrated prehistoric bestiaries. I still have the books, and even now I'm taken aback by some of the fever-dream critters that occupy their pages. But then again, I always contend that our contemporary biological world contains equally astonishing specimens. The blue whale is just the most obvious example that the past doesn't always trump the present.