by Oisin Curran
NEXT PAGE 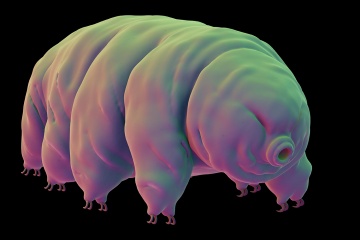 The humans knew it was coming, but there was nothing they could do. Four thousand light years away, a collapsing star sent a giant gamma ray bursting across the galaxy in a massive wave of energy. When it arrived, it wiped out the ozone layer, created monsoons of acid rain and froze the planet. It extinguished all life on Earth.

Well, not quite all.

Just as the extinction of the dinosaurs helped pave the way for the rise of mammals (and subsequently humans), the gamma ray made way for something else. If you'd been part of an expedition sent by an alien civilization to see whether any life survived the gamma ray, imagine guiding your spacecraft down through the omnipresent storm clouds until you catch sight of the shattered, empty cities with their toppling husks of skyscrapers, their flooded subways, their corpse-strewn sidewalks. Imagine skimming the funereal suburbs, the ruined farms, the dead forests and assuming that nothing could have possibly remained alive in the face of such devastation.

But soon enough you would see us. Many billions of us, in fact. Who are we? The humans called us tardigrades. We call ourselves top dogs. That's because there aren't any dogs left, metaphorical or otherwise. With all those other lifeforms gone, we've been free to evolve from microscopic, eight-legged, indestructible, panda-like creatures into giant eight-legged, indestructible, panda-like creatures.

Once, human scientists called us cute. Starting with their discovery of us in 1773, they began poking, prodding, dehydrating, freezing, baking alive and generally torturing us in every twisted way imaginable. Where are they now, those supercilious white-coated demons with their soft, vulnerable flesh and blood? They're the ashes we tread underfoot as we go about ruling this planet in fulfillment of our destiny!