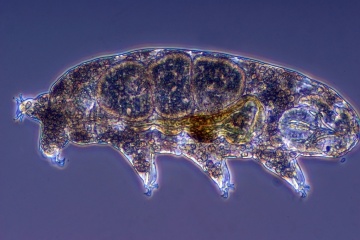 For starters, a tardigrade is an animal. A very, very small animal. One of its many nicknames is "water bear" because, as mentioned earlier, some people say it resembles a panda bear (if a panda bear were microscopic and had eight legs). It's also been called a moss piglet, a pygmy rhinoceros and a pygmy armadillo. It has no backbone, but this does nothing to detract from its good looks. Currently, it appears to be the leading candidate for the title of "cutest invertebrate ever."

A lot of the tardigrade's fellow mini-invertebrates tend to ping-pong around like kids on a sugar high. Tardigrades, by contrast, amble about in a slow, charming manner that has endeared them to generations of biologists. In fact, the name tardigrade is derived from Latin and means "slow walker."

They're about a hundredth of an inch in length (500 micrometers) and can actually be seen with the naked eye if you have excellent eyesight and the light is just right [source: Miller]. However, they're also see-through, which makes an already difficult task even harder. A microscope is your best bet.

They have short little legs, each one outfitted with a set of claws. In a unique formation, their two rear legs face backward, which gives them added agility when climbing ponderously over moss, lichen and fallen leaves. At least, that's what the land-roving species of tardigrades does. There are also aquatic and marine variations, which hang out in both fresh and salt water. In other words, taken as a whole, tardigrades can be found in just about every environment we've got.

Like snakes or lobsters, tardigrades sport a tough exterior cuticle that they shed and re-grow as they mature. Inside, they've got the basics: a brain, nervous system, esophagus, stomach, intestines and anus. But they lack frills like a heart, lungs or veins because their body cavity is what's called "open hemocoel," which means that gas and nutrition can move in, out and around efficiently without complex systems [source: Miller].

The animal kingdom (Animalia) has about 36 phyla in it — one of those is phylum Tardigrada [source: Miller]. That's right, they've got their own phylum, whereas we humans belong to the Chordata phylum, a classification we share with every other vertebrate on Earth, including fish and the aforementioned skin-shedding snakes.

Tardigrades. They think they're sooo special. And they're right.