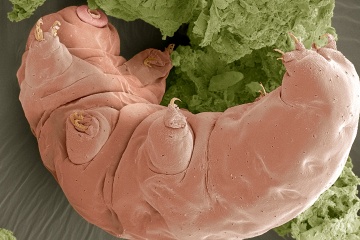 In December 2015 a research team from the University of North Carolina at Chapel Hill published the startling results of their efforts to sequence the genome of a tardigrade species known as Hypsibius dujardini. The team, headed by Thomas Boothby, had been astonished to discover that the water bear's DNA was full of genes from other sources, especially bacteria. In fact, it appeared that more than 17 percent of the tardigrade's genes were from bacteria, microbes and fungi [source: Yong]. Nobody had ever found anything like this before.

It's not unusual for an organism to have a few foreign genes — aphids get their colors from fungi, ticks acquired bacterial genes that can produce antibiotics and some wasps have weaponized viruses for personal use. But in almost all such cases, the alien genes contribute no more than 1 percent of the organism's total genome.

At the level of the single cell, beings can trade genes back and forth "horizontally" with no regard for propriety or hygiene. So it's not at all uncommon to see bacterial DNA stuffed full of foreign genes they picked up from their neighbors. But when you get into the multicellular world (i.e., the world of living things you can see with the naked eye) most of us get our genes the traditional way — from our parents and our parents' parents and so on in a "vertical" ancestral lineage.

It seems that multicellular organisms typically keep their reproductive genomes carefully protected from foreign genes, preventing the kind of "horizontal gene transfer" seen in bacteria. So why would tardigrades, with their 1,000 cells, be so open to exotic genetic information? Boothby and his team theorized that the secret lay in the cryptobiotic process.

Apparently, when organisms dry out, their DNA breaks up into pieces. Luckily, tardigrades have a particular talent for stitching those pieces back together the moment they get wet again. But, Boothby et al. postulated, in the process of mending their genomes, it could be that tardigrades accidentally sew in a few genes from other nearby dehydrated sources (like bacteria or fungi), soaking them up like a sponge. By doing this over and over again, Boothby said, they'd basically seasoned their genome with thousands of genes from foreign sources [sources: Richards and Monier, Yong].

Boothby and his team wondered if this unusual genomic profile might contribute to the now-legendary durability of tardigrades. More research would have to be done.