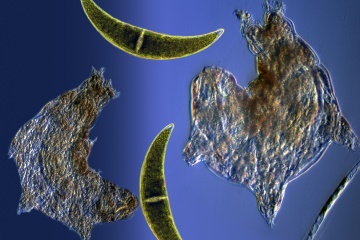 Tardigrades float around with some algae.
Roland Birke/Photographer's Choice/Getty Images

Ah, science. Science is fun, science is fascinating, but science also plays hardball. It's not a profession for the faint of heart or for those who get sentimentally attached to a research result. Boothby and his team knew very well that their tardigrade study had surprising findings, and they also knew that all those foreign genes might be the result of contamination (i.e., some bits of fungi and bacteria might've managed to get mixed in with the tardigrade sample by accident).

They knew that because contamination happens all the time. It's all too easy for bits of floating bacteria and fungi to get mixed in with a sample. So the team double and triple checked their results with increasingly sophisticated technology. It seems you can't be too careful when it comes to sequencing genomes.

The digital ink was barely dry on all the excited press coverage of the Boothby team's findings before a careful review of the evidence by other scientists found that there was, in fact, a ton of contamination involved. After reanalyzing the sequencing, it appeared that instead of a whopping 17.5 percent foreign gene count, the tardigrade species in question had only about 0.4 percent of the stuff. And that, it turns out, is a pretty standard amount [source: Richards and Monier]. In other words, there is evidence of horizontal gene transfer in tardigrades, as there is in all organisms (including us), just not very much of it — which is, as it turns out, the usual amount.

So it turns out that tardigrades aren't a perfect metaphor for the durability of multicultural societies, but they're still cool nonetheless. They've been around for 500 million years, so they can surely teach us a thing or two, like how to survive in outer space, how to repair our DNA and how to get our own phylum.

Best of all, you can keep them as pets! All you need is a little container, some moss, a microscope and a really small leash (you'll have to special-order it). The only downside is that you can't really give them names — or you can, but since they're all nearly identical, it'll be tough telling Charles from Charlene and Charles Jr.

Much of the scientific literature on tardigrades makes mention of how "cute" they are. I think this must be a matter of context. If you spend a lot of time staring through a microscope at weird-looking creatures, your standards for cuteness must necessarily be lowered. Personally, I find tardigrades grotesque. I mean, I greatly respect their invincibility, but they look like a cross between a mole and an overstuffed pool raft. But beauty is as beauty does.