by Mark Mancini Aug 14, 2019
Spiders that spin webs have one to four pairs of tiny "spinnerets" that dispense the silk for their webs. Mohamed Abdulla Shafeeg/Getty Images

Greek mythology tells of a mortal seamstress named Arachne. Her extraordinary talent was matched only by her ego — and in a moment of pure hubris, she challenged the goddess Athena to a high-stakes weaving contest. Suffice it to say this didn't go well for Arachne. After the showdown, she was transformed into a spider. At least she got to keep her hobby.

Just like Arachne, a lot of spiders are famously good weavers. Using materials that can be stronger than steel, the eight-legged critters spin all kinds of different webs, some big, some small.

If you look at the tip of the abdomen on any given spider, you'll find one to four pairs of tiny, stub-like appendages. Those are the spinnerets, the organs that dispense silk. Each one is connected to special glands located inside the abdomen. Said glands create protein-rich liquids that are squeezed out of "spigots": microscopic openings in the spinnerets. Upon exiting the body, the liquids solidify and become silk.

Mind you, not all spider silks are created equal. The chemical composition of silk threads is highly variable. And sometimes, it can be altered before the pre-silk liquids get a chance to harden. Plus, by tensing or relaxing, spigots can change the thickness of the silken fibers they release. A lone spider may have dozens, hundreds or thousands of spigots all working together in concert, producing silks with lots of different consistencies.

One of the better-known families of spiders are the orb-weavers. Encountered on every continent but Antarctica, their ranks include around 3,500 species worldwide. Individual orb-weavers can generate eight to nine different types of silk. To protect their eggs, for example, the arachnids bundle them up in woven sacs with a layer of nice, soft silk at the center. But spider silk also comes in firmer, tougher varieties.

Orb-weavers create those dartboard-style, vertically oriented webs that most people think of when they hear the term "spider web." We're talking about the spiraled little beauties you've probably seen in countless backyard gardens.

Construction begins after an orb-weaver makes its "bridge thread." The first line in a new web, this is usually a lightweight strand that the spider uses to ford the gap between two firm objects — like tree limbs, rocks or window sills. Our spineless pal waits at one end of the divide and lets this thread drift in the wind until it makes contact with the other side. When that's done, the bridge thread is secured at both ends and reinforced with additional lines of silk.

The bridge thread is the first third of a woven triangle. So-called "frame threads" are built in all three corners of this structure. Together with the major lines on the triangle's sides, they create attachment platforms for a set of very tough threads known as "radii." Extending outward from a point at the center of the web (i.e. the "hub"), the radii look like the spokes on a bicycle wheel.

Next, a silken spiral is woven around the hub, covering much of the radii. Some orb-weavers will repeat this process: After building an initial spiral out of non-sticky silk, they replace it with a sticky-threaded substitute.

Obviously, webs don't last forever. According to "Spider Silk: Evolution and 400 Million Years of Spinning, Waiting, Snagging and Mating" — a 2010 book by Leslie Brunetta and Catherine L. Craig — there are orb-weavers who make a brand-new web every single day. To avoid running out of material, they eat their old webs. The digested proteins are then incorporated into fresh silks. (Remember kids, always recycle.)

A completed web is a multi-faceted tool. When another creature gets ensnared in one, vibrations in the silken threads convey information about its size and whereabouts. Spiders utilize this information while approaching their victims.

Also, researchers have discovered that some orb-weaver webs attract flying insects via static electricity. One species — the garden center spider (Uloborus plumipes) — creates these by weaving threads that get electrically charged when the arachnid rubs its legs on them. Afterward, some portions of the web become more adhesive.

To Weave, or Not to Weave?

But why should orb-weavers have all the fun? Spider webs come in more than 130 known shapes, many of which look pretty far removed from the iconic orb-weaver design.

For example, numerous spiders weave horizontally oriented "sheet webs." Oftentimes, the setup includes an overhanging layer of disheveled threads that intercept unwary flying insects. Here, the idea is for the victim to collide with one of the upper threads — and then fall down onto the sticky sheet below.

However, sheet webs might play a more active role in prey capture. A 2017 study indicates that moths are attracted to the big, horizontal webs of the lace sheet weaver (Psechrus clavis) — a subtropical Asian spider — because it uses highly reflective silk. Since moths can't see very well, entomologists think the winged critters may be mistaking these clusters of luminous threads for well-lit forest clearings.

Another common type of spider web is the much-maligned "cobweb." Sewn by black widows and some related species, cobwebs don't come in well-organized geometric patterns. On the contrary, they're messy-looking tangles of silk that tend to be found underneath protective covers like roofs, rocks or branches.

And then we've got spiders who don't even bother with webs. Wolf spiders and crab spiders have no need for them because the free-ranging arachnids can usually out-muscle their prey — without using any silken traps. Likewise, tarantulas forego the web-weaving process (although they've been known to line their burrows with silk in order to keep unwanted dirt from accumulating).

Other species use silk in creative projects. Trapdoor spiders mix it with dirt and vegetation to create movable lids for their underground homes. But they — like wolf spiders — refrain from web-building. So if she'd been offered a choice, Arachne the seamstress would probably be happier as an orb-weaver. Or maybe a black widow.

NOW THAT'S INTERESTING
The aquatic diving bell spider (Argyroneta aquatica) builds portable webs underwater and uses them to trap bubbles of oxygen. Furthermore, scientists recently learned that the peculiar webs actively pull oxygen out of the surrounding H2O — much like the gills of a fish. 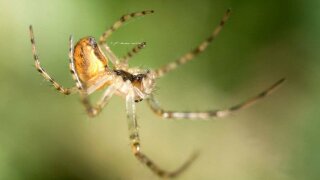 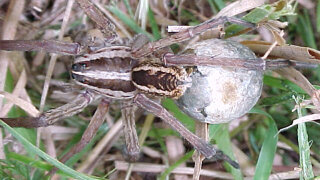 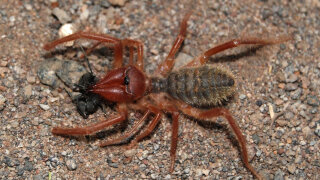 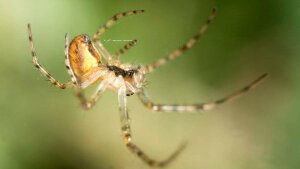 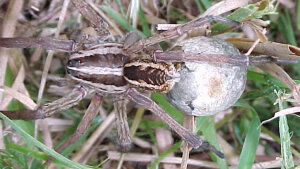