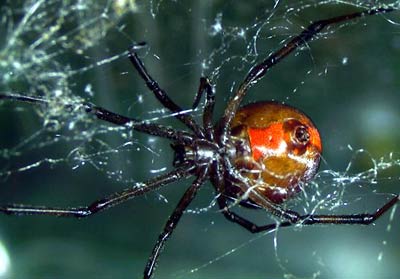 An orb-spinning spider puts its elegant traps together pretty quickly, proceeding easily from step to step according to the instruction manual preprogrammed into its brain. The diagram below shows the major steps.

Every web begins with a single thread, which forms the basis of the rest of the structure. To establish this bridge, the spider climbs to a suitable starting point (up a tree branch, for example) and releases a length of thread into the wind. With any luck, the free end of the thread will catch onto another branch. If the spider feels that the thread has caught onto something, it cinches up the silk and attaches the thread to the starting point.

It walks across the thread, releasing a looser thread below the first one. It attaches this thread on both ends and climbs to its center. The looser strand sags downward, forming a V-shape. The spider lowers itself from this point, to form a Y-shape. This forms the core support structure of the web.

The spider easily grips the thin threads with special serrated claws, a smooth hook and a series of barbed hairs on the end of its legs. As it walks along the initial structural threads, it lays more frame threads between various anchor points. Then it starts laying out radius threads from the center of the web to the frames. The spider does not coat the frame and radius threads with sticky material, since it needs to walk across them to get around the web.

The spider sits in the middle of its web, monitoring the radius threads for vibrations. If an insect gets caught in any part of the web, the spider will feel the motion through the radius threads and make its way to the vibration source. In this way, the web extends the spider's sensory system over a much wider area. The spider might also leave the web, to retreat to a separate nest, while monitoring the web via a connected signal line.

Web-spinning spiders have an innate ability to tell the difference between vibrations from insect prey and vibrations from other sources (a leaf falling into the web, for example). Many species can also distinguish the characteristic vibrations of dangerous insects, such as wasps, from their preferred prey.

When the orb web has deteriorated and is no longer useful, many spider species will destroy it, eating up all the threads so it can recycle the raw silk material. Spiders may leave the heavy bridge thread so that they can easily rebuild the web at a later point.

Not all spiders catch their prey by spinning a web. In the next section, we'll look at some other methods of hunting.