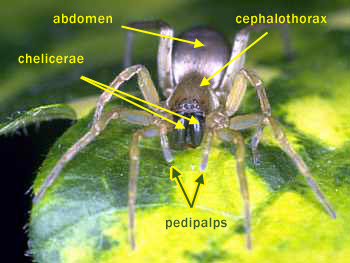 Spiders have the same basic bodily systems as people, but they don't work in the same way and they're arranged differently in the body. The cephalothorax contains the brain, stomach, eyes and mouth, and the abdomen contains the heart, digestive tract, reproductive organs and lungs.

Spiders have two different types of respiratory systems -- trachea and book lungs (most species have both, but some have one or the other). Compared to human lungs, these respiratory systems are incredibly simple. Trachea are just long tubes that run from a slit in the exoskeleton through the body. Air flows in, oxygen diffuses into the blood and carbon dioxide diffuses into the air. The spider's normal movement provides all of the necessary energy to push air in and out. Book lungs are a series of very thin, leaf-like structures (like the pages in a book). The inside of each leaf is filled with blood, and the outside is exposed to air. As in the trachea, the book lungs exchange oxygen and carbon dioxide through diffusion.

The spider's blood, called hemolymph, circulates oxygen, nutrients and hormones to the different organs in the body. Unlike humans, spiders have an open circulatory system. The spider's simple heart -- a tube surrounded by a muscle, with a one-way valve on each end -- pumps blood into the body cavity, all around the spider's organs. Organs get oxygen because they're soaking in blood.

One of the most amazing things about spiders is how much they can accomplish with such a small brain. The spider's central nervous system is made up of two relatively simple ganglia, or nerve cell clusters, connected to nerves leading to the spider's various muscles and sensory systems. The simple instructions encoded in these nerve cells give spiders all the information they need to undertake complex tasks, such as building webs and attacking prey. Some species even exhibit learning behavior. If something isn't working -- a web in a particular spot, for example -- the spider will give up the activity and try something new.

While most spiders have multiple pairs of eyes, vision is a secondary sense in the vast majority of species. Most spiders primarily interact with the world through tactile sensation. They are covered in highly sensitive hairs that pick up even low-level vibrations in whatever the spider is standing on (the ground, floor, leaf or web, for example). Many spiders have additional hairs, called trichobothria, which pick up vibrations in the air (sound). Most spiders also have a sense of taste and smell, which play a role in feeding and reproduction.

Many spiders have special adaptations that allow them to walk easily along relatively smooth or vertical surfaces. The end of each leg is covered with thick brushes of hair, and the end of each hair is covered in tiny microscopic "feet." All the tiny feet grip the small bumps on whatever the spider is walking on, allowing the spider to move easily over most terrain (the smooth surface of the bathtub being a notable exception for many species).

Spiders have thick brushes of hair, each ending in tiny microscopic feet that let it walk up vertical surfaces.
Tarantulas

To many arachnophobes, large, hairy tarantulas are as bad as it gets. But in fact, tarantulas, a loose term for large, hairy spiders in the mygalomorphae suborder, are relatively harmless to humans. Most spend their time in the brush or in holes, waiting for their prey to wander along. They do not spin webs, and they aren't venomous to humans. Their fangs can puncture the skin, however, and some species can shoot barbed hairs from their back.