How Spiders Use Silk 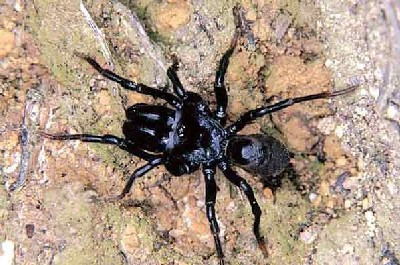 Purse web spiders coat a hole in the ground with silk and lie in wait for passing prey.
Photo courtesy Ed Nieuwenhuys

While all spider species spin silk, they do a number of different things with the fiber once they produce it. Not all species spin webs, and many don't use their silk in hunting at all. Just like human building materials, spider silk has a wide range of applications.

One of the most common silk uses is the dragline. As some spiders move from place to place, they lay out a thin, dry thread behind them. Just like a mountain climber, the spider uses the thread as a safety line. If it gets in trouble, it can quickly backtrack on the line to get to safety.

Another common silk use is nursery building. In most species, female spiders will spin a thick, protective cocoon for their developing eggs and sometimes the spiderlings once they've hatched. Some species will leave the cocoon unattended while the young spiders develop, and others, such as wolf spiders, will carry the cocoons around with them.

The most familiar use of silk, of course, is web building. Web structure varies a good deal from species to species. Some spiders build totally disorganized cobwebs, some form long funnels out of silk sheets and some work as a colony to form huge masses of silk sheets around plant life. Some spiders, such as the net-casting spider, will form a small web between their legs and quickly wrap up any insect that gets caught.

The best-known web is the orb web, the intricate design spun by most garden spiders. This web is one of the most remarkable structures in nature, and its construction is among the most incredible animal activities you'll ever see. We'll examine this process in the next section.

Diving water spiders, or Argyroneta aquatica, are one of the most amazing animals on the planet. These spiders breathe air just like other arthropods, but they live most of their lives underwater. The trick is the spider's diving bell.

To build the diving bell, the spider first forms a web platform underwater, typically connected to a plant. Then it carries air bubbles down under the web, on the underside of its body. It releases the air bubbles under the web to gradually build a stable underwater air pocket -- the web keeps the air bubbles from rising to the surface. The spider ventures out to catch fish, tadpoles and other pond animals, and brings the prey back to the diving bell to eat it. It also mates, lays eggs and raises spiderlings in the bell.