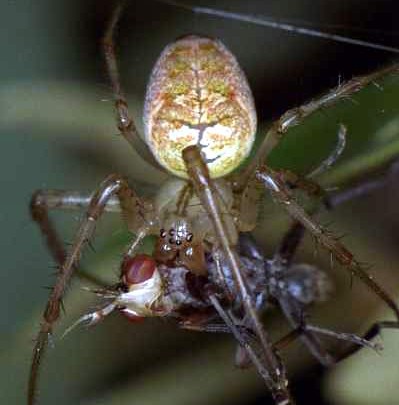 Studies have shown that jumping spiders can solve simple 3-D puzzles; they also learn the behavior patterns of other spiders in order to capture them. See more pictures of arachnids.
2008 HowStuffWorks

Studies have shown that you're never more than ten feet away from a spider, and one estimate puts you as close as three feet. To be "spider-free" you'd have to go into space in a fumigated capsule. Rather than flee, read these facts and appreciate our amazing arachnids.

Unlike insects, spiders cannot fly--but they can balloon! Young spiderlings pull out silk until the breeze can lift them into the sky. Most don't travel high or far, but some have been seen at altitudes of 10,000 feet and on ships more than 200 miles from land. Most ballooners are very small spiderlings, but adult spiders have been captured by planes with nets.

Female wolf spiders carry their egg sacs behind them, attached to their spinnerets. After the spiders emerge, they crawl onto the mother's abdomen and hold on while she actively runs and hunts. After about a week, the spiderlings molt to a larger size and then take off to live on their own.

While most spiders live for one year, a few may have more than one generation each year. Some spiders can live 3 to 4 years, and certain tarantulas are known to live for 25 years or longer.

Some spiders live underwater all of their lives. They surface to collect a bubble of air, which acts as an underwater lung. An underwater spider fills its bell-shape web with air bubbles and derives oxygen from them.

The fisher or raft spider is able to walk across the surface of a pond or other body of water by skating like a water strider. When it detects prey (insects or tiny fish) under the surface, it can quickly dive to capture its dinner.

Male spiders are almost always smaller than the females and are often much more colorful. Some males are so small that they actually look like they're newly hatched.

Spiders eat more insects than birds and bats (combined) eat, so they should be considered another of human's best friends. They play a big role in controlling insect populations.

Spiders are not only predators, they are often prey. Many birds and animals love to feed on them. The coatimundi, a relative of the raccoon, are fond of eating large tarantulas.

A few species of trapdoor spiders use their abdomens to "plug" their burrows to protect themselves from wasps. The abdomen is flat on the back end and tough enough that a wasp's stinger can't penetrate it.

It is estimated that up to 1 million spiders live in one acre of land--in the tropics, that the number might be closer to 3 million.
2008 HowStuffWorks

Male spiders are unique among all animals in having a secondary copulatory organ. While most animals spread their sperm in water or insert them into the female, mature male spiders weave a small "sperm" web. They place a drop of semen on the web, suck it up with their pedipalps (special structures on their first "arm"), and then use the pedipalp to insert the sperm into a female.

Hummingbirds use the silk from spider webs to weave together the sticks that form their nests.

The decoration in the web of some orb-weaving spiders serves a variety of purposes: It can be a warning so birds don't fly into the web, an attractant so insect-prey fly in on purpose, or an "um-brella" to shade the spider from the hot sun.

Some orb weavers make very unusual webs. One variety greatly increases the area above the center, creating what is sometimes called a ladder web that extends eight feet above the spider.

Bolas spiders make webs of a single line with a sticky "ball," or bola, on the end. These spiders can twirl the bolas in the air. Moths are attracted to the smell and fly toward the web until they hit it and stick. The spider then reels in its catch.