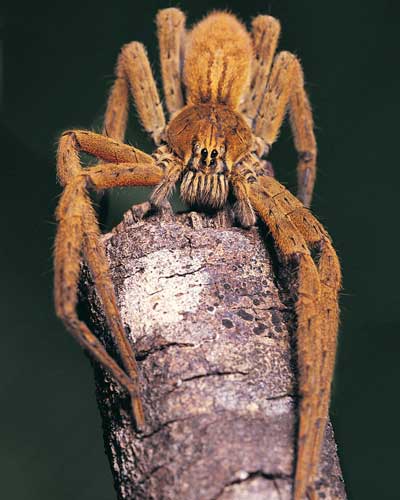 Love 'em or hate 'em, you've got to admit that arachnids, like this huntsman spider are some pretty impressive, well-equipped animals. See a "holy" spider next. 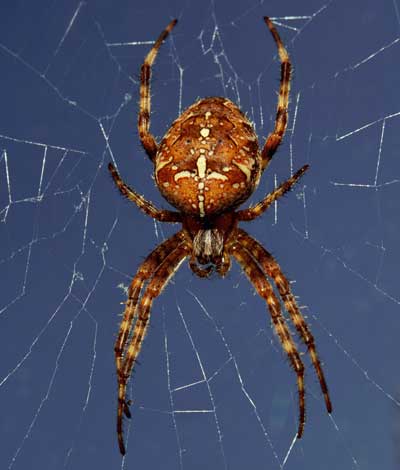 The garden spider, also called a cross spider (after the white cross formation on its back) is a web-building spider found in gardens. Arachnids include spiders, scorpions, harvestmen, mites and ticks. See a most poisonous kind next. 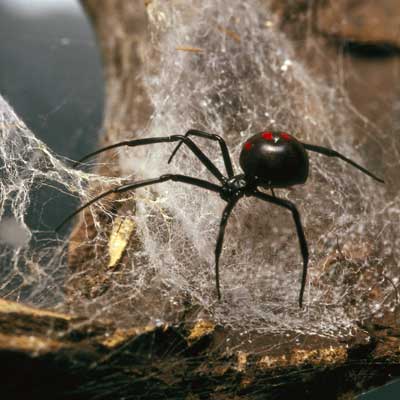 Black widows are one the most poisonous and dangerous spiders in the world. They are found throughout the U.S., but predominantly in the South and West. See another super poisonous spider next. 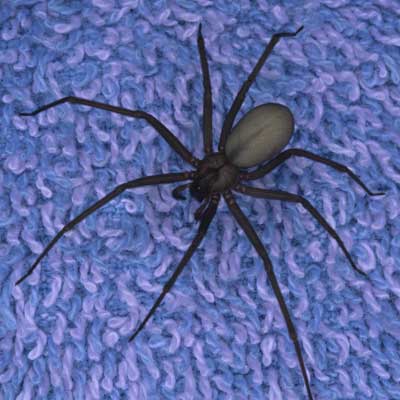 A bite from this brown recluse can leave you with significant scarring from tissue breakdown, but odds are strongly in favor of your survival. You can identify brown recluses by the violin-shaped marking on their abdomens. Find a parasitic arachnid next. 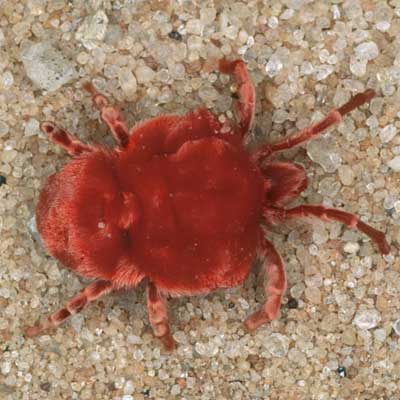 Mites, like this Red Velvet mite, are a group of invertebrates related to spiders. Mites are 1/64 inch to 1/8 inch in length. When a mite bites, its entire head is thrust into the wound. An anchoring structure below the jaws holds firmly to the wound. See the largest of all spiders next. 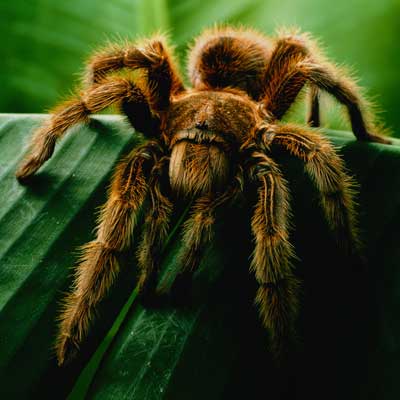 Though the tarantula, like this Chilean rose species, may look menacing, these arachnids are very popular as pets. The world's largest tarantula is the Goliath birdeater tarantula. Its leg span can be more than 10 inches. See a master of disguise next. 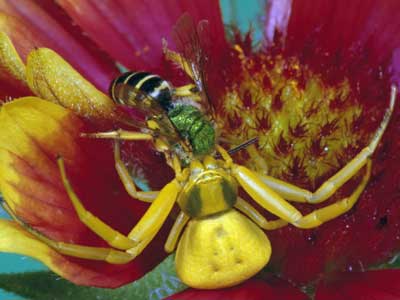 Misumena vatia, the yellow crab spider above, can change its coloration over a couple of days to match flowers and other surroundings. See another kind of arachnid with a distinct body shape and pointed stinger up next. 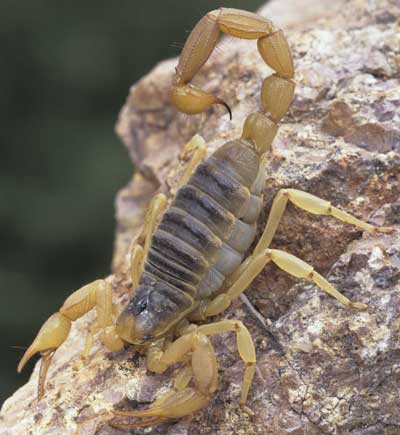 Of the 1,300 known scorpion species across the globe, fewer than 40 of them possess venom powerful enough to kill a human. Those dangerous species are found in the Middle East, Africa, Mexico, South America and India. What's a spiderling? Find out next. 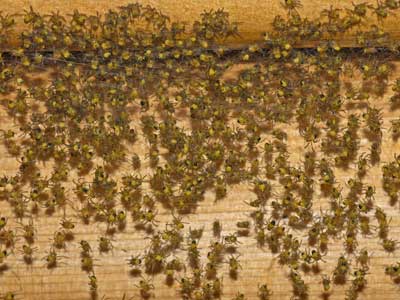 Spiderlings are what baby spiders are called. Some spiders may lay hundreds, even thousands of eggs at one time. As the spiderlings grow, they molt their exoskeleton and grow a new one to accommodate their increasing size. See an adult 'cucumber spider' next. 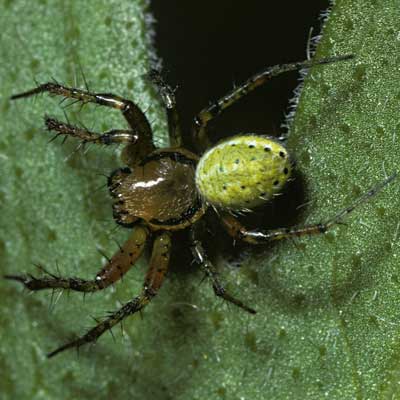 Spiders, like this Araniella Cucurbitina spider, eat more insects than birds and bats (combined) eat. They play a big role in controlling insect populations. See an arachnid that probably lives in your carpet next. 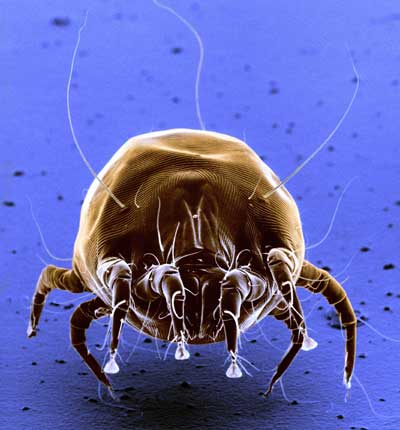 If you have a persistent allergy, then you're probably no stranger to dust mites. These microscopic arthropods may be the most common cause of year-round allergies. Dust mites produce up to 200 times their body weight in waste each day. See a traveling spider next. 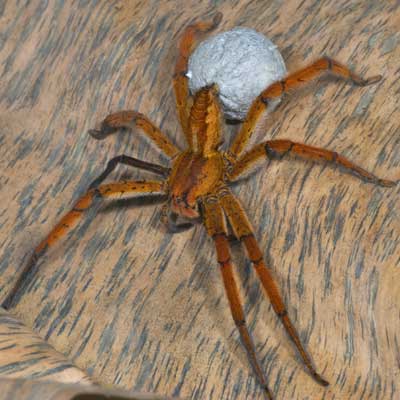 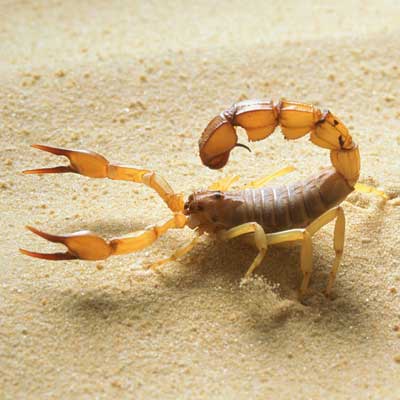 Scorpions, like this yellow fat tail, have been around for an estimated 450 million years. Their distinct body shape and pointed stinger have earned scorpions a negative reputation for millennia, commonly associated with evil and chaos. Check out the web-weaver up next. 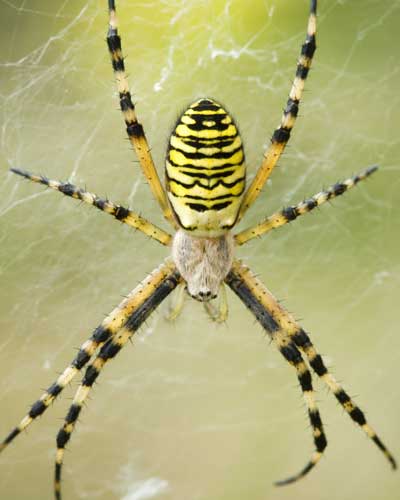 Orb web spiders, like this wasp spider (Argiope bruennichi), weave some pretty ornate webs. Orb weavers are fussy builders, and a spider may tear down its web each night and build a new one. It may even eat the old web to recycle the silk. Find a blood-sucker next. 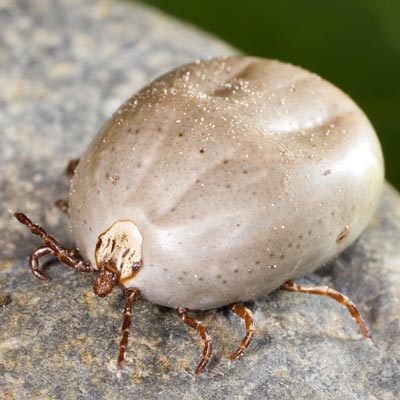 Ticks are parasites -- they feed on their hosts' blood. Some ticks, particularly females, swell dramatically when they ingest a lot of blood. In addition to their feeding behavior and appearance, ticks are disease vectors. They can carry illnesses from one animal to another. In fact, ticks are the primary disease vector in domestic animals. See a most impressive web next. 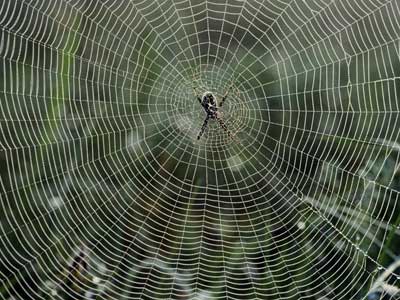 Web-spinning spiders have an innate ability to tell the difference between vibrations from insect prey and vibrations from other sources (a leaf falling into the web, for example). Many species can also distinguish the characteristic vibrations of dangerous insects, such as wasps, from their preferred prey. Did you know that certain spiders can walk across water? See one next. 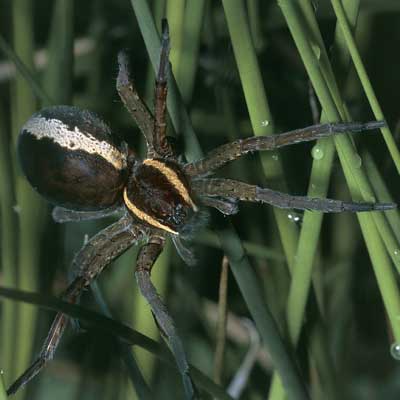 The fisher or raft spider is able to walk across the surface of a pond or other body of water by skating like a water strider. When it detects prey under the surface, it can quickly dive to capture its dinner. See a "daddy longlegs" next. 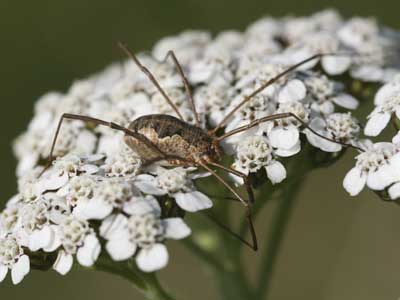 There are over 3,200 species of harvestmen, 200 of which are native to the United States. Unlike a spider, a harvestman has long, stiltlike legs and a segmented abdomen, and lacks silk glands. Be careful or the next arachnid might jump on you. 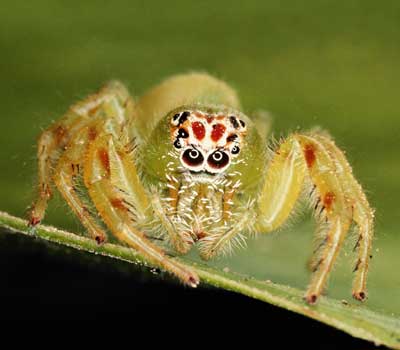 Jumping spiders have the ability to jump great distances -- as far as 50 times their own length. With more than 5,000 species, jumping spiders are one of the more common spider varieties around. Next, be careful to look before you smell a flower. 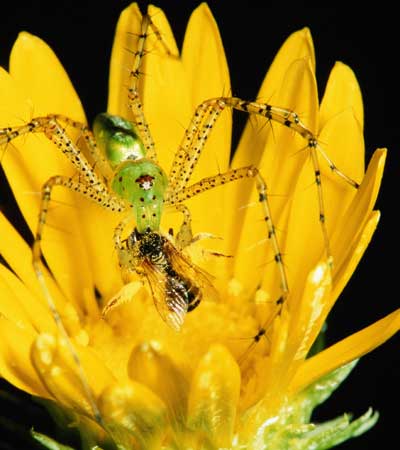 In their 400 million years of existence, spiders, like this lynx spider, have spread over every continent and mastered nearly every environment on Earth. Today, there are about 40,000 known spider species, and potentially thousands more we haven't discovered yet. See a Malagasy orb weaver next. 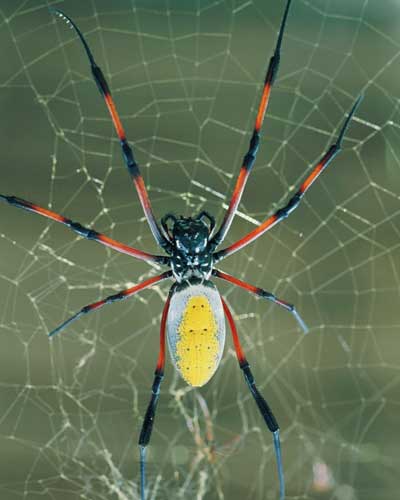 Orb webs are large and round. The main threads look like the spokes on a bicycle wheel. These threads are made up of dry silk. Threads of loose, sticky silk connect the spokes. The sticky threads are the ones that trap the spider's prey. See a most venomous scorpion from the U.A.E. next. 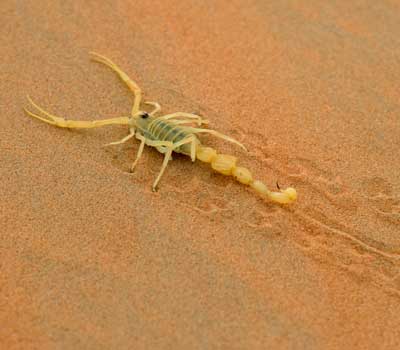 Of the various species of scorpions that occur in the United Arab Emirates, the Buthacus yotvatensis nigroaculeatus is the most poisonous. Scorpions are carnivorous arachnids that primarily feed on other insects and even other scorpions. Do you know how strong spider silk is? Find out next. 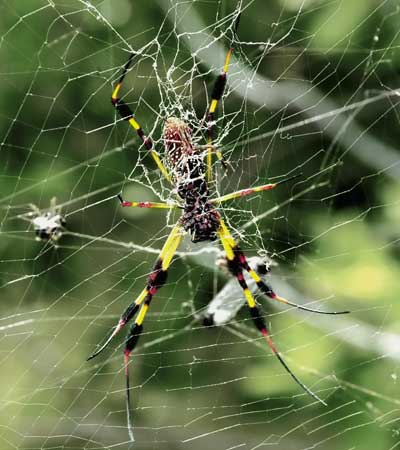 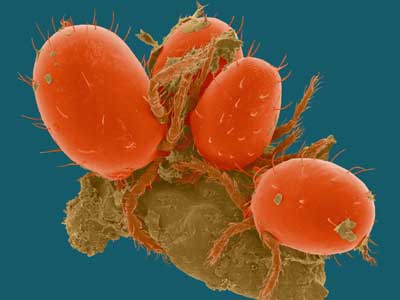 Chiggers are the larvae of mites belonging to the suborder prostigmata, commonly called harvest mites or scrub mites. Chiggers actually feed on the fluids in skin cells. How do spiders reproduce? See one of the steps next. 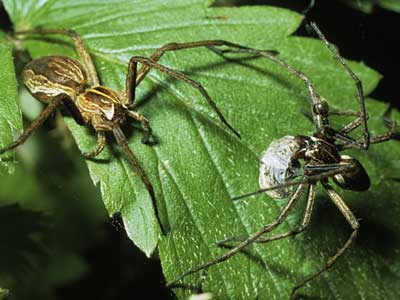 Many spiders with better eyesight, such as these wolf spiders and jumping spiders, will "dance" to court the female.