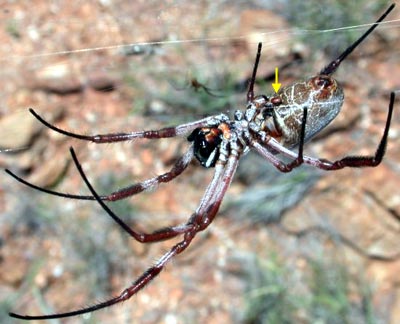 The male spider's primary objective in life is to impregnate one or more female spiders before other males can. As it turns out, this is no easy task in most species.

The first obstacle is actually finding a female spider. Most spider species are completely solitary animals, meaning they live and feed on their own, and they are generally spread out over a wide area, making an available female relatively scarce. The male spider has the daunting task of tracking down a sexually mature, receptive female in the area before other males can get there.

In most species, the female makes it easier on the males by "advertising" herself with pheromones, communicative chemicals. Many female ground spiders will secrete a pheromone on their dragline, the silk thread they leave trailing behind them. When males of the same species come across the dragline, they smell the pheromone with the chemical sensors on their front legs and follow the dragline to the female.

Web-spinning females may release pheromones directly into the air or coat their webs with pheromones, to make a natural "chemical antenna." Males may also stake out developing, sexually immature female spiders, so they can be the first to mate after the spider's final molt.

Once the male locates a female, it has to contend with any other males in the area. In species where the female spins a pheromone-coated web, the male's first order of business is to destroy the web to cut off the signal attracting any other males. If other males are present, the spiders in most species will fight it out for the right to copulate with the female.

After taking care of any other male contenders, the spider's next task is to deal with the female spider itself. Male spiders are generally much smaller than females in their species, making them easy prey. The male has to signal to the female that it is a spider of the same species, not food or a potential predator, and that it intends to copulate. This is courtship.

Courtship varies considerably among different species. Many web-building spiders will use vibration as a means of courtship communication. The male may strum a unique signal on a thread connected to the female's web to identify itself and get across its intentions. Many spiders with better eyesight, such as various wolf spiders and jumping spiders, will "dance" to court the female.

Once the female recognizes the male's courtship behavior, she will position herself for sex, signaling to the male that she is receptive, or she will make it clear that she is not receptive (by shaking her web, for example, or just crawling away). If the male is desperate to mate, because all the females in the area will soon lay their eggs, he may proceed anyway, with full understanding that the female might kill him.

Both the male and female reproductive organs are at the rear of the abdomen, but spiders don't mate by coupling these organs. Instead, the male deposits some sperm onto a small web and picks it up on the end of his pedipalps. When the female is in position, the male deposits the sperm in the female's genital opening. The female stores the sperm in receptacles near the ovaries. When she is ready to lay her eggs, months down the road in some species, she uses the sperm to fertilize them. Some spiders may lay hundreds, even thousands of eggs in one shot.

In the next section, we'll look at what happens once the eggs are fertilized.