How do flies breathe? 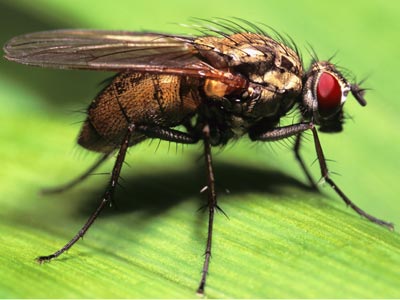 Insects breathe in a way that is very different from us. Instead of having a central place to gather oxygen (i.e. lungs) and a transport system (i.e. heart, blood) to deliver the oxygen to all of the cells of the body like us, insects have a system of fine branching tubes called a tracheal system that delivers the oxygen directly to each cell in the body. Imagine that you are an oxygen molecule in the atmosphere and you are about to be "breathed" into an insect.

The movement of air through the tracheal system of most insects relies solely on diffusion. Because most insects rely on diffusion, which occurs best over small distances, they cannot get very large. You will not see huge ants, like in the movie "Them," because enough air could not diffuse that far into their bodies to keep their cells alive. However, some larger insects can use their abdominal muscles to force air in and out of the tracheal system in a limited way.

So, with this system in mind, it would be difficult to strangle a bug. However, if the tracheal system fills with water, it takes much longer for air to diffuse through the system. Therefore, an insect can drown fairly easily.