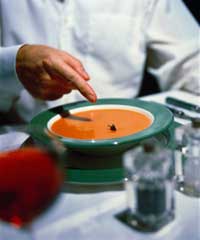 Has this ever happened to you? A housefly may be a tasty meal for some animals, but offers only the risk of illness for humans. See more insect pictures.
Nick Dolding/Stone/Getty Images

What's that irritating buzz I hear? What's crawling across my television set? Waiter, what's this floating in my soup? Unless you live in polar regions, the answer to all these questions, sooner or later, is inevitably the same: the common housefly.

While there are certainly other flies and insects that make themselves at home in your home, 90 percent of all flies found inside are members of the specific species of fly musca domestica. That's right, the term "housefly" isn't just a generic term; it's a specific kind of fly that happened to find its evolutionary niche living among us.

But the problem with flies isn't just that they irritate us by trespassing. Houseflies carry and spread a number of potentially deadly diseases including typhoid fever, salmonella, tuberculosis, conjunctivitis, leprosy and cholera, as well as intestinal worms and the bacteria responsible for dysentery. They feed and reproduce on garbage, feces and rotting flesh. And then, after picking up millions of microorganisms, they fly into our homes and land on our food, bodies and personal belongings, leaving behind the same germs.

In this article, we'll take a close look at this garbage in, garbage out diet, the anatomy and life cycle it nourishes, and how you can best protect yourself.