Will a turkey really drown if it looks up during a rainstorm? 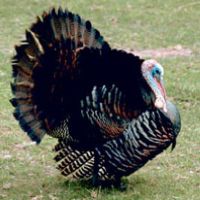 Is there a reason this turkey is looking down? See more pictures of wild turkeys.
Photo courtesy Gary M. Stolz U.S. Fish and Wildlife Service

Turkeys are the mainstay of our Thanksgiving feast. Maybe it's their awkward gait, the wobbly red wattles under their necks, or the strange sounds they make, but turkeys have gained a reputation for being stupid creatures. Some people even use the word "turkey" to mean inept or stupid.

Perhaps the "dumb bird" reputation is the reason behind the tale that during a rainstorm, turkeys will stare up at the sky with their beaks hanging open, transfixed, until they drown. Although turkeys sometimes do tilt their heads up at the sky and remain there for several moments, scientists say the idea that turkeys drown that way is just a myth.

Turkeys have monocular vision. Their eyes are located on either side of their head so they can look at two things at once, but both eyes can't focus on the same image at the same time like human eyes. Although this feature helps turkeys avoid potential predators, it doesn't give them very much depth of vision. Turkeys tend to tilt their heads to the side to get a better look at something. If a turkey were to tilt its head backwards to look at the rain, it would likely have trouble focusing on the raindrops.

So why do turkeys sometimes stare skyward? Tom Savage, a professor of animal science at Oregon State University, says that the root of this behavior is not stupidity, but genes. In the early 1990s, he discovered an inherited condition in turkeys, called tetanic torticollar spasms. This condition can cause turkeys to exhibit abnormal behaviors, such as looking at the sky for 30 seconds or more at a time.

Turkeys actually aren't as dumb as they may look. They socialize with each other, and if humans are around, they will come over to greet them.

Here are some real facts about turkeys: ­

Can Different Bird Species 'Talk' with Each Other?
Only Birds Have a Syrinx and That's Why They Sing
Penguins: The Monogamous Tuxedoed Birds That 'Fly' Underwater