Miss Lucille was a sweet little pullet (young hen), who found a cozy home in the chicken coop of Kristi Allen's (not her real name) Powder Springs, Georgia backyard. Initially, things appeared to be status quo with the young exchequer leghorn cross. After observing her for a time, however, Allen noticed Miss Lucille was growing a comb. Although both sexes of the breed can have them, Allen's instincts told her that perhaps something wasn't quite standard, so she sought the help of a local farmer.

"The farmer did all of the checks to confirm Miss Lucille was a 'miss,'" Allen recalls. "She had no saddle feathers [pointy feathers at the base of the tail], no aggression, didn't jump or react in the presence of other hens/roosters, and when she was laid back in the farmer's hand, she stuck her legs out straight and just laid there. All are old timers' tricks to identifying roosters since there's no definitive way to tell until they mount another chicken or crow, aside from lab testing."

Miss Lucille had "failed" the rooster test. However, later on, Allen arrived home to a mess of feathers in the backyard, an unusual event because hens don't usually molt until around 18 months. "She began acting more temperamental, but I attributed that to her molting, as it can be quite uncomfortable for chickens," she says. "I was worried about her health."

Something to Crow About

Although strange things were certainly afoot in Miss Lucille's world, none of them were health-threatening. When her feathers grew back, they were saddle feathers, like those found on roosters. Her hackles and tail feathers had also undergone some major changes. "She went from being your typical hen to a rooster with beautiful, long tail feathers and pointy hackles. Her gait changed, and she was definitely at the top of the pecking order," Allen says.

Further consultation advised a wait-and-see approach. One farmer told her, "Just because she now looked like a rooster didn't mean she was one. I needed to wait until she crowed or mounted one of the hens."

Ironically, Miss Lucille became more mellow and friendly. "But then her comb kept getting bigger and redder. For every indicator she might still be a 'she,' there was another for her being a 'he,'" she says.

Finally, the irrefutable proof came at around 5 months of age –- the rooster literally crowed. "Every day the crow grew louder and stronger. It was official that Miss Lucille was now Mr. Lucille," Allen says. "And to his credit, he assumed the role wonderfully. If the girls were low on water, he'd crow and let me know to get on it. He'd lead the charge up to roost at night. He'd wake us up with his song early each morning."

How Does a Hen Become a Rooster?

Spontaneous sex reversal, such as in the case of Mr. Lucille, is extremely rare. In fact, a study out of Bangladesh found that only 28 of 3,000 hens monitored underwent reversal. The jury's still out on exactly why this phenomenon occurs, but there are some prevailing theories, according to Drew Benson, assistant professor of poultry science at the University of Georgia.

"Current evidence shows that sexual differentiation in birds is a mix of direct genetic and hormonal mechanisms," he says via email, noting that most instances of spontaneous sex reversal in birds, such as Mr. Lucille's, are believed to be connected to alternations in sex steroid hormone action, such as estrogen. "The right ovary and oviduct [tube through which the egg passes from the ovary] regress during embryonic development, leaving the hen with only one functional ovary, the left one. Should the left ovary be removed or become dysfunctional due to disease, the regressed right ovary may form an ovotestis," he explains.

The hypothesis is that estrogen activity suppresses development of the right gonad. But, when the ovary fails to secrete estrogen, the medullary tissue in the rudimentary right gonad is then changed into an ovotestis, a testis-like structure. "The ovotestis will begin to secrete androgens that masculinize the female bird," he says, noting that the lack of estrogen will change the bird's plumage and the increased testosterone causes the crowing and growth of head ornaments, like the wattle and comb.

Scientists aren't sure why this happens. Benson says that it's pretty common for ovarian disease to cause dysfunction of the ovaries, yet spontaneous sex reversal is much less common. "You couldn't simply remove an ovary from a hen and generate a spontaneous sex reversal," he says. "In fact, the exact mechanism underlying avian sex determination has yet to be resolved."

So, what's a hen-turned-rooster owner like Allen to do? "Embrace the fact that you have a rare chicken as many will not undergo this transformation following a decline in ovarian hormone synthesis," Benson says. "The newly changed chicken is no longer going to produce eggs, so you would need to get a new hen if you wanted egg production."

Allen had to farm Mr. Lucille out to another rooster-lover once the crowing got out of control, however. "We have a subdivision behind our house, and although we are fortunate enough to be able to have roosters on our property, we didn't feel it was the neighborly thing to do," she says. "While I miss him, I don't miss the early morning wake up call. And I'm happy he's where he can do his thing freely."

Now That's Interesting
The pecking order is real, and sometimes it's vicious. The most aggressive chicken claims the top spot, pecking if necessary to get the point across. Chief status helps it get the best perch or sleeping spot and priority access to food and water, while it acts as protector of the flock. If there's a rooster present, he'll usually be chief chicken.

The Duckmaster Rules the Roost at the Peabody Hotel

Indie Bookstores Defied Amazon. Who's Next? 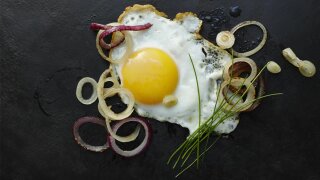 If Hens Lay Eggs Anyway, Why Wouldn't Vegans Eat Them? 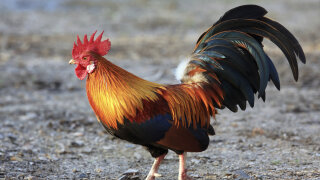 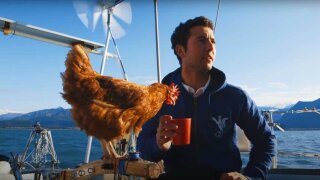 Sailing Around the Globe With a Pet Chicken Named Monique