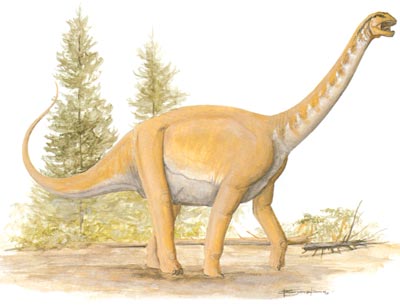 Named for a word meaning "big leg" in a local dialect in central India, Barapasaurus is the oldest known sauropod dinosaur. Early Jurassic sauropods are rare. The sauropods may have evolved from a prosauropod ancestor. Barapasaurus proves that even the earliest sauropods were giants.

Barapasaurus lived at the same time as the last prosauropod dinosaurs. In some ways, Barapasaurus was similar to the prosauropods, but in other ways, it was quite advanced. But its vertebrae, pelvis, and large size prove it belongs to the sauropods. Barapasaurus was almost as large as Diplodocus (a Late Jurassic sauropod of North America). Barapasaurus was probably a plant-eater, using its long neck to gather leaves from treetops.

The only mounted dinosaur skeleton in India, where dinosaurs are rare, is Barapasaurus. The skeleton includes mostly leg bones and vertebrae. The skull was not found, but several teeth were found near the skeleton. The teeth were spoon-shaped; these may have been the front teeth that were used for cropping vegetation. The chewing teeth were likely larger and flattened for cutting or crushing food.