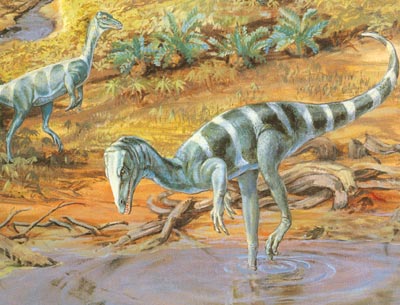 A mass of tangled bodies rolled with a flood, sliding over trees that had fallen into the muddy waters. The rains stopped and hundreds of carcasses of Coelophysis, the nimble predator of the Late Triassic, settled into the mud. Some skeletons were complete, some were torn apart, but all went to the bottom of the stream. Two hundred million years later, at Ghost Ranch in northern New Mexico, paleontologists unearthed a treasure trove of dinosaur skeletons. They were all from one group devastated by a flood in the Late Triassic. The animals here ranged from hatchlings to adults more than two meters long.

The body of Coelophysis was only a little larger than a turkey. It had a long slender tail and jaws filled with dozens of knife-edged teeth. Coelophysis was an unusual predator. It lived in large herds, something that does not happen in today's world. Although grazing animals such as wildebeest or caribou live in herds in our modern world, no predators live in large groups. Trampled areas around Ghost Ranch suggest that herds of Coelophysis migrated.

The animal's rear legs were strong and agile. It had feet with three long toes and one short one, and it was quick to leap away from larger predators, such as crocodilelike phytosaurs. The front legs of Coelophysis were small and probably were not used for walking. They were more likely used to gather food. Its head was large, with a pointed snout and large eyes. Coelophysis was a master of ambush. Perhaps a fish-eater, it seems that this 100-pound predator lived along streams, moving through ferns and horsetails, always on guard for its enemies. It also ate insects, lizardlike reptiles, and other small dinosaurs.

Besides the skeletons from Ghost Ranch, New Mexico, Coelophysis has also been found in the Painted Desert of Arizona. The petrified logs found there, many longer than 100 feet, show us what the forests looked like when these little dinosaurs ran about.

These are among the oldest, if not the oldest, dinosaurs in North America. Coelophysis is the oldest dinosaur in the world known from complete skeletons. The name Coelophysis means "hollow condition," referring to the hollow bones of the legs. They were built much like birds' bones for minimum weight and maximum strength. Coelophysis bauri is the only species known. Coelurus was an early name used for some of the original bones, which were mistakenly given several names.

In the rib cages of two adults from Ghost Ranch are the skeletons of young Coelophysis. They are too large and well developed to be unborn babies. This may have been cannibalism-one individual of a species eating another-and the prey was swallowed whole.

Relatives of Coelophysis include Podokesaurus; Halticosaurus and Procompsognathus from Germany; and Syntarsus from Zimbabwe and Arizona.

Unlike the giant predatory dinosaurs of later times, the Triassic theropod dinosaurs were also prey. Their enemies included the enormous phytosaurs, which weighed a ton or more, and the active and powerful rauisuchid predators such as Postosuchus. These adversaries dominated the Triassic landscape, both on land and in the water.

How Deinonychus Upended the Way We Look at Dinosaurs
Nigersaurus: The 'Mesozoic Cow' With More Than 500 Teeth
Scientists Unearth Another Archaeopteryx, an 'Icon of Evolution'