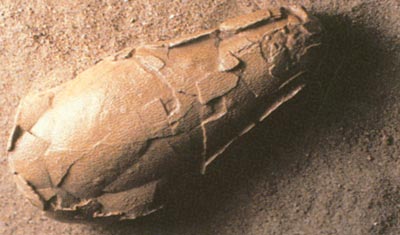 Fossilized dinosaur eggs were first unearthed in Mongolia during the 1920s. Dinosaur eggs usually are rare fossils, but they have been found in China, Mongolia, India, France, and South America. Besides shedding light on dinosaur nest structure, the eggs seemed to tell little.

But the recent discoveries of dinosaur nests, nurseries, eggs, embryos, hatchlings, nestlings, and juveniles in Montana have greatly increased our knowledge. Dinosaurs that began life as helpless hatchlings-the embryos show whether the animal could walk once it hatched-must have required parental care to survive. Other dinosaur hatchlings that could have walked once they hatched probably were left by themselves. To confirm this, the eggs of dinosaurs that required parental care are found smashed to bits, as if the hatchlings lived in their nests. The eggs of dinosaurs that were able to take care of themselves are usually found unbroken. By studying the sizes of the dinosaurs in the Montana nurseries, scientists may find out how many seasons it took for a particular species to grow big enough to leave the nursery and venture into the dangerous world. Unfortunately, nest structures and eggs have been found for only a small number of species.