This one was always my favorite when I was a kid. Now I see her; she's the most beautiful thing I ever saw.
Alan Grant, "Jurassic Park" (1993)

Even if your dinosaur phase came and went a few decades ago, you'll probably recognize Triceratops. The frilled, three-horned herbivore died out 65.5 million years ago, but you can find its likeness pretty much anywhere — from museums to toy stores to a National League baseball park.

Our fossil record has been kind to this beast. Hundreds of Triceratops bones have turned up in the American West and they're actually hard to avoid at the fossil-rich Hell Creek Formation of Montana, Wyoming and the Dakotas.

Treasure in the Badlands

Unaware of the specimen's age, Marsh figured it came from a prehistoric bison, which he named Bison alticornis. Later discoveries proved the creature was actually a dinosaur far larger than any cow relative. One incomplete skull bearing three horns and a partial beak found its way to Marsh after some Wyoming cowboys had lassoed the thing, snapping off a horn in the process.

Marsh dubbed the animal Triceratops, meaning "three-horned face," in an 1889 scientific paper. Note that this is a genus name; under the system we use to classify living things, a genus is one step above a species. So within the same genus, you can have multiple, closely-related species.

Close attention is required to tell these animals apart. All Triceratops had three-horned skulls, with two massive horns above the eye sockets and a smaller one over the nose. However, adult Triceratops prorsus had slightly longer nasal horns than their cousins did. Another difference? The beaks of Triceratops prorsus looked proportionately shorter.

We know both species changed as they aged. And not just in terms of overall body size. A bony frill protruded from the backside of every Triceratops skull. When these animals matured, their frills grew longer.

Often compared to medieval shields, these frills may have served a defensive purpose. Or maybe they evolved as communication tools; the structures could've been vibrantly colored, advertising the health and stamina of individual dinos.

Triceratops hatchlings had stubby little brow horns above their eyes. These horns lengthened and curved backward during adolescence. But over time, a dramatic reversal took place; the horns straightened out and then bent forward in older specimens.

In an undated photo, Dr. Barnum Brown, left, Associate Curator of fossil reptiles at the University of Wisconsin, and Charles Lang (in charge of preparation and mounting) discuss a Triceratops skeleton from Hell Creek, Montana.
Bettmann/Getty Images

Unlike alligators and monitor lizards, Triceratops held their arms and legs in a (more or less) vertical position. Yet as Donald R. Prothero notes in his 2019 book "The Story of Life in 25 Fossils: Tales of Intrepid Fossil Hunters and the Wonders of Evolution," most Triceratops fingers didn't point dead ahead. Instead, these hand digits were angled away from the body. (Think "jazz hands.")

Thus, Triceratops has the distinction of being one of the last non-avian dinosaurs to ever evolve.

It was also a late-arriving ceratopsian. Distributed across Eurasia and North America, the ceratopsians were a group of plant-eating dinosaurs that predominantly lived in the Cretaceous. Known for their beaks and long, flaring cheek bones, they ranged from bipedal, dog-sized animals to ... well, giant quadrupeds like Triceratops. Many had horns and/or frills, arranged in a spectacular array of different combinations.

Triceratops belonged to the chasmosaurinae, a major subgroup of these dinos characterized mainly by their elongated snouts (among other features).

Large eyebrow horns were another common trait among the chasmosaurines, Triceratops included. Lesions and fractures are regularly seen on Triceratops frill and cheek bones. These could indicate that the animals used their brow horns in one-on-one combat with each other.

The jury's still out on whether or not Triceratops moved in herds. But we have a pretty good idea of what the creatures ate. Their teeth were arranged in so-called "dental batteries." Every individual tooth was stacked in a vertical column of three to five teeth. And these formed rows, with 36 to 40 tooth-loaded columns occurring side by side. Altogether, a single Triceratops could have 800 teeth at its disposal.

With its narrow beak, powerful jaws and replaceable (self-sharpening) teeth, Triceratops probably fed on cycads and other tough, fibrous plants.

Ah, but what ate Triceratops? Well, we know Tyrannosaurus rex lived in the same time and place — and it occasionally made a meal of the big herbivore. Bite marks matching T. rex's distinctive teeth have been found on several Triceratops skeletons, with the frills and faces getting more than their fair share of the injuries.

Pointing to these scars, some have argued that T. rex would methodically rip the heads off dead Triceratops. By grabbing ahold of the frills and tugging, the predators could decapitate the bodies, exposing choice neck muscles below. Nothing beats a hard-earned meal.

Torosaurus was another chasmosaurine from the late Cretaceous of North America. Its skull could grow to 8.8 feet (2.7 meters) long, giving it one of the biggest heads of any land animal in Earth's history. A 2010 paper, published in the Journal of Vertebrate Paleontology, argued Torosaurus should be reclassified, claiming the beast didn't really belong in its own, separate genus. Instead, the authors felt the materials we have on record actually came from very old (and very large) Triceratops adults. However, most ceratopsian specialists now dispute that idea. 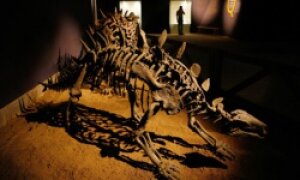 Fossils: From Organic to Rock in a Matter of Millennia 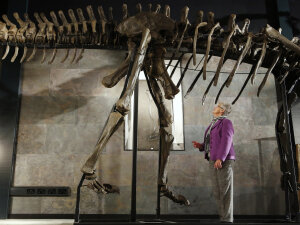