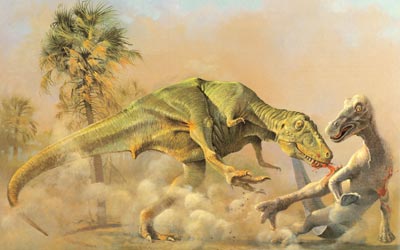 Imagine a creature as tall as a split-level house, with a head the size of an easy chair and a mouth over a yard long. The mouth was filled with as many as 60 teeth, some the size and shape of bananas. With powerful legs, it swiftly chased its prey, which it could eat in hugh gulps. Even today, 90 years after it was discovered by Barnum Brown in the Hell Creek Formation of Montana, Tyrannosaurus rex remains the largest known predator to have walked the earth.

Probably the most familiar dinosaur, Tyrannosaurus rex, the North American species, is known from only seven incomplete skeletons and other assorted remains. T. rex has been found in Texas, Wyoming, Colorado, South Dakota, Montana, and Alberta. A few paleontologists think that there may have been two species of Tyrannosaurus in North America, but others believe the differences were between males and females. Tyrannosaurus rex was about 13 feet (4 meters) tall and more than 40 feet (12.2 meters) long, but a huge upper jawbone at the University of California at Berkeley comes from an animal that may have been 16 feet (4.9 meters) tall and more than 50 feet (15.2 meters) long, and outweighed even the heaviest modern elephant.

The latest T. rex was found in Montana in 1987. It is the most complete specimen found; it has a skull about five feet long and may prove to be nearly 50 feet (15.2 meters) long when it is finally excavated. It is also the first specimen found with nearly complete forearms. This animal had two-fingered hands, with robust arms. It probably used its front limbs as hooks to hold struggling prey.

Tyrannosaurus was built for hunting. The eyes of most meat-eating dinosaurs were on the sides of their skulls, but those of T. rex faced more forward. It may have been able to judge depth and distance. It was not a scavenger, as some paleontologists once thought, but if it found the body of a dead dinosaur, it would not have passed up a free meal. The teeth in the front of its jaws were shaped differently from those in the sides. Different shapes may have had different uses.

Considering its enormous size, the skull of Tyrannosaurus was lightly built. It had wide fenestrae (openings) and hollow bones. Some of those bones were not joined tightly, which is one reason Tyrannosaurus skulls are often not found whole. Like most theropods, its lower jaw had a hinge that allowed it to open out as well as down, so it could have swallowed large chunks of meat.

Powerful muscles on the thighs and tail probably made traveling easier for even the largest theropods. Some researchers believe Tyrannosaurus could have walked all day at 4 or 5 mph (6.4 or 8 kph) in search of food and could have run at speeds greater than 30 mph (48 kph). However, there are other theories about how fast Tyrannosaurus could run. Some researchers say this dinosaur couldn't move faster than 22 mph (35 kph) due to the amount of weight being put on the skeletal framework [source: Fitzgerald]. Other researchers wonder if Tyrannosaurus could run at all. They theorize that a giant this size would need an impossible amount of leg muscle to take a jog around the block [source: Fitzgerald]. They estimate Tyrannosaurus was physically unable to run fast and traveled at a top speed of 10 to 25 mph (16 to 40 kph) [source: Levy].

A closely related animal, named Tarbosaurus bataar, is based on a large partial skull discovered in the Gobi Desert in the late 1940s. Several nearly complete skeletons of this species were excavated. Some of the skeletons were smaller animals and different enough from Tyrannosaurus to be considered a new animal, named Tarbosaurus efremovi. Some paleontologists believe that Tarbosaurus and Tyrannosaurus are the same genus, but different species. Recent work has shown that these specimens had probably died before reaching full adult size. So they may be a species of Tyrannosaurus. Further studies are being done to find the truth about its relationships.

Tarbosaurus bataar grew to about the same length as T. rex, but it was a lighter, more slender animal that lived a few million years earlier. Its eyes did not face forward as much as those of T. rex. 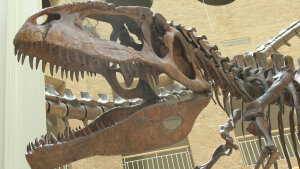