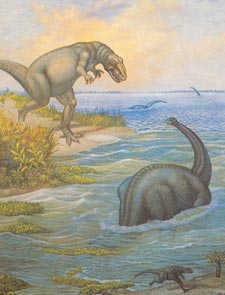 Allosaurus means "other reptile," a strange name for the most powerful, fearsome, and deadly dinosaur of the Late Jurassic. Allosaurus was the main enemy of the giant sauropods, including Apatosaurus and Diplodocus, even though the plant-eaters weighed much more than the two-ton predator. Until the tyrannosaurs appeared 50 million years later, Allosaurus and its relatives were the largest predators to roam the earth.

At the Cleveland-Lloyd Dinosaur Quarry in Utah, more than 10,000 bones have been excavated since 1927, and about half are Allosaurus bones. The number of Allosaurus bones is unusual, because there is usually about one predator for every ten plant-eaters. This was probably a predator trap, where a few animals that were prey got caught, maybe by tar, and then predators came to feed on the bodies. But they also got caught in the trap. None of the skeletons of Allosaurus are still connected. The skeletons were probably trampled and pushed around in this trap. Other animals, including the herbivores Stegosaurus and Barosaurus, were also found.

The allosaurs from this quarry include all ages. There were animals from only a little over a foot in length to those more than 40 feet long and weighing more than two tons. Other allosaurs were estimated at more than 49 feet long and weighed almost three tons. Two other predators at the Cleveland-Lloyd quarry were Stokesosaurus and Marshosaurus; both were small and slender. A third predator found was Ceratosaurus, a medium-size theropod. All these animals were rare compared to Allosaurus.

The powerful skull of Allosaurus was the perfect meat-eating machine. The jaws were large and massive, with serrated teeth as well designed for cutting meat as a steak knive. It probably overpowered its prey and used its massive jaw muscles; its large, powerful neck and head; and its daggerlike teeth to kill and eat its prey. These predators were widespread. They left their broken teeth near the bodies of many animals, showing where they had been.

The front limbs of Allosaurus were short but strong, and the hands had three fingers each. Each finger had a sharply curved and pointed claw. It probably used its front limbs to capture prey and grab the flesh when feeding. The rear legs were large and powerful, built for both speed and agility.

Allosaurus probably ate any animal it could ambush or overpower. The tremendous size of the sauropods was probably an obstacle for even the largest Allosaurus. Like lions today, Allosaurus was probably opportunistic. It attacked old or weak animals when possible and stole carcasses from other predators.

The most common species is Allosaurus fragilis. A close relative of Allosaurus is Acrocanthosaurus from the Early Cretaceous in North America.