by Mark Mancini Jun 19, 2018
This skeleton of a theropod, a carnivorous dinosaur, was discovered in the state of Wyoming by British paleontologists and was sold by French auction house Aguttes on June 4, 2018, for $2.36 million. Chesnot/Getty Images

On June 4, 2018, the remains of what is most likely a predatory Allosaurus were sold to the highest bidder at the Aguttes auction house in Paris, France. Nearly 30 feet (9.1 meters) long and 70 percent complete, it's valuable in more ways than one. Like all fossils, these bones are ambassadors from an earlier time. The creature they belonged to drew its last breath in Wyoming 150 million years ago. It was a different world back then: Earth was considerably warmer and most mammals were rabbit-sized or smaller.

Auction houses know there are plenty of buyers who will pay top dollar to own a rare and scientifically significant piece of prehistory. Aguttes sold the skeleton of another meat-eating dino for $3.2 million in 2016, and it recently fetched $641,000 for a complete woolly mammoth. Those sums look like pocket change next to the $8.36 million that the Chicago Field Museum and several corporate partners (like the Walt Disney World Resort and Ronald McDonald House Charities) paid in 1997 for "Sue," the most complete Tyrannosaurus rex ever found.

Before you can have a sale, there has to be a seller. We recently discussed the legality of fossil collecting with P. David Polly, a professor of geology at Indiana University. On top of his duties to the school, Polly is the current president of the international Society for Vertebrate Paleontology (SVP), which boasts over 2,300 members.

"Laws covering fossils vary considerably from country to country," says Polly in an email. In the United States, fossils that are discovered on federal land are considered public property. "They are held in trust on our behalf by the U.S. federal government," Polly explains. "The Paleontological Resources Preservation Act (PRPA), which was passed by Congress in 2009, stipulates that scientifically important fossils ... can only be collected with a scientific permit and must be placed in an approved repository — i.e., a research collection of a museum or university — where they will be available to scientists and other interested people." (Native American land is exempted; according to the Federal Register, fossil-collecting on this soil falls "under the jurisdiction of tribal authorities.")

The act is a bit more lenient when it comes common plant and invertebrate fossils like trilobites. Private citizens are allowed to collect these "for personal use in reasonable quantities" on federal land without a permit. However, any fossils taken from federally owned rock "may not be bartered or sold" later. Note that special rules may apply to certain remains and locations. For example, it's a misdemeanor to collect petrified wood in Arizona's Petrified Forest National Park. If you've got any questions about the rules in your area, please get in touch with the closest BLM office. "Some US states, such as Wyoming and California, have similar laws protecting fossils on state lands," Polly notes.

Privately held land is a horse of a very different color. In countries like Mongolia, dinosaur fossils are considered to be part of the nation's shared cultural heritage — regardless of where they were found. As such, they can't be sold in private markets, and personal ownership of these remains is against the law. But in America, fossils discovered on private property belong to the landowner.

So if you, as a resident of the United States, find a dino skeleton on real estate that you own, you can legally keep, sell or export it. The question is, should you?

A Blow to Science?

The carnivorous dino that just changed hands in Paris was excavated from private land between 2013 and 2015. Upon learning that Aguttes planned to auction it off, the Society for Vertebrate Paleontology wrote an open letter begging the organization to cancel the sale. Aguttes sold it anyway. The buyer's identity isn't known, but he or she has stated that the bones will be loaned out to a museum at some point so researchers will get the chance to study them.

For the world's scientific community, this assurance isn't enough. Peer review is an important facet of paleontology. If one dinosaur expert writes something about a particular fossil, his or her colleagues need to be able to go back and inspect the specimen for themselves. Doing so requires guaranteed access to the remains — something private fossil-owners may choose to withhold.

Geological context is another thing to consider. The rock in which a fossil is found is just as important as the fossil itself. To figure out how old a specimen is or what its environment looked like, we need to know exactly where it came from. Private fossil-buyers might be unable to provide this information.

Then there's the small matter of museum budgets. Universities and public museums frequently can't afford to meet some of the high prices that've been set by auctioneers and fossil-dealers in the wake of Sue's blockbuster sale.

"Almost everybody has gotten excited at one time or another about the massive dinosaurs that once walked the Earth," says Polly. "That inspiration comes directly from the fact that many of them were carefully excavated, placed in public trust repositories, and become part of the scientific record. Unfortunately, that same excitement can make people want to have one of their own."

It's true that fossil salespeople have made some major contributions to paleontology. (Just look at Mary Anning, an English seller of prehistoric treasures who discovered the extinct marine reptiles Ichthyosaurus and Plesiosaurus.) Regardless, Polly and many of his fellow scientists worry that countries which don't commit to putting their important fossils in the public trust "where anyone can study them" are forfeiting a gold mine of knowledge.

"Fossils are not like works of art: they weren't created to be high-priced collector's items," he says, "they are rare remnants of our past that are important to us all."

Now That's Interesting
Actor Nicolas Cage (of all people) now knows a thing or two about Mongolia's strict fossil laws. In 2007, the skull of an Asian tyrannosaur called Tarbosaurus went up for auction. Cage bought it for $276,000, outbidding fellow movie star Leonardo DiCaprio. When he learned that the fossil had been illegally poached from Mongolia, Cage agreed to repatriate his Tarbosaurus head back to its native land.

Are Meat Sweats a Real Thing? 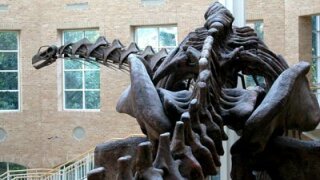 How are fossil replicas made? 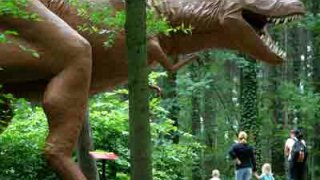 Was Tyrannosaurus rex a predator or a scavenger? 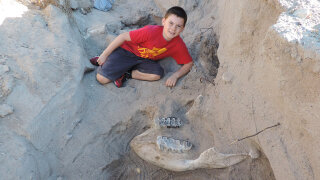