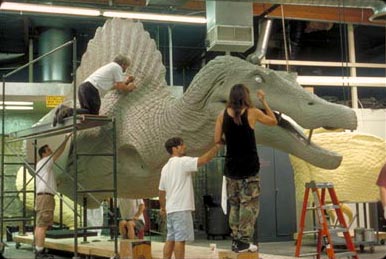 Interest in dinosaurs soared to new heights in the 1990s, thanks largely to the blockbuster film Jurassic Park. So too did dinosaur discoveries. Since 1990, more than 100 new dinosaur genera have been described and named.

A couple dozen new dinosaurs have been found in western North America. Moreover, paleontologists in South Dakota discovered the most complete Tyrannosaurus rex skeleton ever. The story of "Sue" captivated dinosaur buffs around the globe. Dinosaur discoveries in Patagonia included the vertebrae of one of the largest plant-eaters that ever lived, Argentinosaurus, which may have been over 100 feet long.

Asia, particularly China and Mongolia, has yielded the largest number of newly discovered dinosaurs. The first feathered dinosaurs, long anticipated because of the close relationship between dinosaurs and birds, finally appeared in the fossil record, at Liaoning, China. The evidence for a dinosaur-bird connection has grown very strong; meat-eating dinosaurs and birds share more than a hundred anatomical features. Although the dinosaur-bird connection was first proposed by paleontologists in the 19th century, the new, computer-oriented methods of classification have finally made this relationship clear.