Brachiosaurus, whose name means "arm reptile," was the giraffe dinosaur of the Jurassic. With its long neck (almost 30 feet long) and tall front legs, this giant sauropod could nip fresh shoots from the tops of trees more than 40 feet above the ground. If Brachiosaurus were alive today, it could peek into fourth story windows.

Other dinosaurs may be larger, such as Antarctosaurus, Ultrasaurus, and Supersaurus, or longer, such as "Seismosaurus," but this is the the largest sauropod known from nearly complete skeletons. So, for many paleontologists, this is the champion for size. Weighing 80 tons, about as much as 12 elephants, Brachiosaurus was a colossal dinosaur that had to feed constantly.

The front legs were taller than the back legs, and the tail was relatively short. Brachiosaurus was heavy in the front and light in the rear. The rib cage was enormous, but because the legs were so tall, the belly was so far off the ground that a Stegosaurus could walk underneath it.

The skull of Brachiosaurus was small, and the jaws were weak. Because the nostrils were high on the head, placed almost between the eyes, paleontologists at first thought Brachiosaurus lived in water and used its nostrils like a snorkel. Instead, Brachiosaurus lived on dry land or along shorelines. It probably did not often go into water where the muddy bottoms would have been slippery and dangerous.

The long neck and front legs resemble the body of a giraffe, and it is possible that Brachiosaurus, like giraffes in Africa today, stood guard in the Jurassic. While it was eating in the high trees, it would have watched for an Allosaurus sneaking in for an attack. Smaller and shorter herbivores such as Apatosaurus and Stegosaurus would have looked to Brachiosaurus for alarm signals.

Brachiosaurus adults were so enormous that they weighed as much as 40 times more than their principal enemy Allosaurus. Unless an adult was sick or wounded, it had little reason to worry about Allosaurus, but a young Brachiosaurus had no defense. When an adult signaled danger, the younger animals probably ran to the center of the herd for protection.

The excavation of Brachiosaurus in Tanzania, Africa, during the early part of the century involved hundreds of local workers who carried the enormous bones by hand for many miles to the seaport. They were then shipped to Germany, and the bones were mounted at the Humboldt Museum in East Berlin. This museum was designed to fit the skeleton of Brachiosaurus. That skeleton is still on display, and it is still the most impressive dinosaur mounted in the world. It is as staggering to visitors today as when it was unveiled many decades ago.

Unfortunately, only a few specimens of Brachiosaurus have been found in western North America. There may have been two species, one in the United States and one in eastern Africa, but they are so similar that their populations must have been connected before Pangaea broke apart. This is one of the largest ranges ever recorded for land animals. 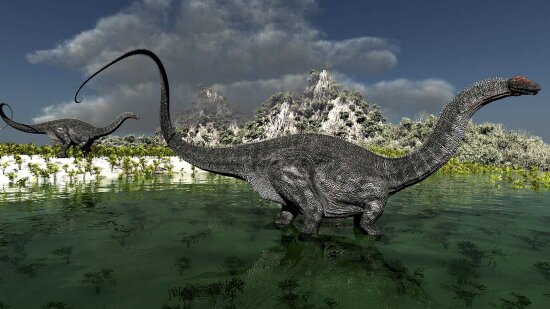 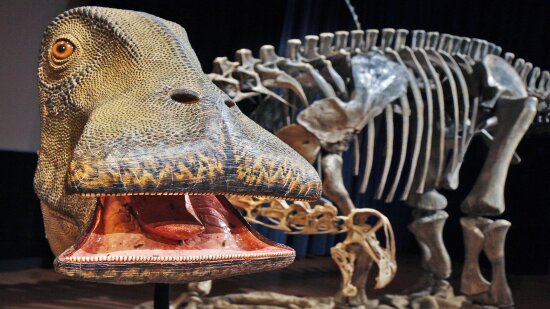 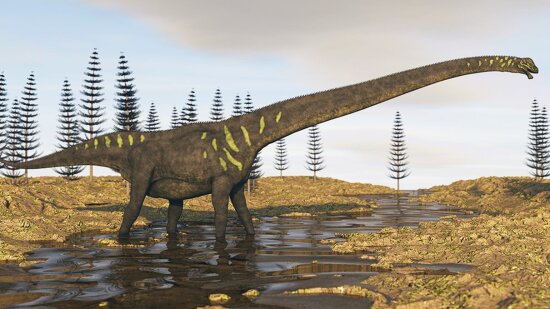