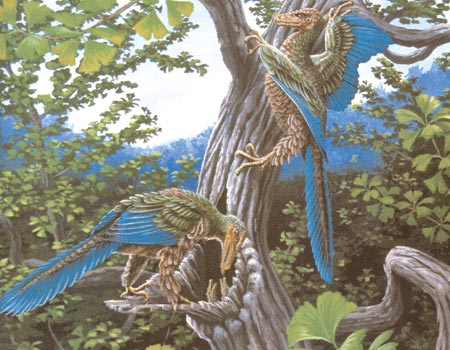 A pair of nesting Archaeopteryx
Chicago Academy of Sciences

Archaeopteryx lithographica is known from only six fossils-they may be the most famous fossils in the world. Its name means "ancient wing from the printing stone" because it was found in the limestone quarries in the Solnhofen region of southern Germany. Limestone has been used for decades to produce lithographs. Fossils found in this fine-grained Late Jurassic lagoon sediment are very well preserved. The fossils also include the rarest fossil find: feathers.

The skeleton of Archaeopteryx was so much like the small meat-eating dinosaurs that several specimens were catalogued as dinosaurs in museum collections. But after closer study, scientists discovered the faint impression of feathers. Because of the feathers, Archaeopteryx is usually classified as a primitive bird. But some paleontologists place Archaeopteryx with the dinosaurs.

Except for the feathers, Archaeopteryx is much like the tiny dinosaur Compsognathus and other small coelurosaurs. The biggest difference was that the long front legs of Archaeopteryx were modified for feathers. The three front toes of Archaeopteryx had claws, and the jaws had pointed teeth.

Archaeopteryx had a long stiff tail, like the tail of the small theropod dinosaurs; tail feathers were attached to it. In all other birds the tail bones are almost entirely lost. A stubby leftover tail, which is called the pygostyle, is where the tail feathers attach.

There is still much argument about the place of Archaeopteryx in evolution. The relationship to dinosaurs is strong, and Archaeopteryx could be the "missing link" between birds and the small carnivorous dinosaurs. This would mean that we see the descendants of dinosaurs every time we see a modern bird. 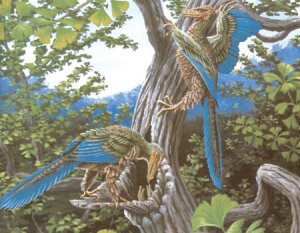