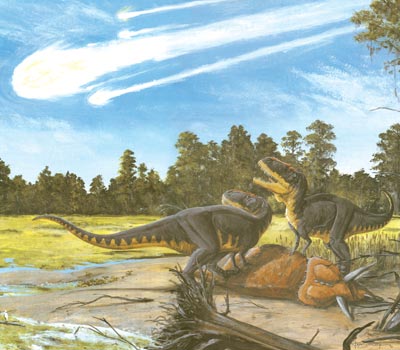 Dinosaurs became extinct at the end of the Cretaceous Period. How and why is a puzzle that paleontologists are trying to solve by studying fossils and rock formations. These fossils and rock formations do not give all the facts, so scientists must take the information and make educated guesses. Sometimes different scientists see the same material but come to different conclusions, so there are many different theories.

Some paleontologists think the extinction was caused by a catastrophe such as a meteorite or comet hitting the earth or a gigantic volcano erupting. Others believe that a more gradual process was responsible. Some theories are that competition between dinosaurs and mammals was the cause, or possibly climate changes. Scientists also disagree about the amount of time it took for the extinction to take place. Some think it happened in several days. Others say it took from hundreds of generations to over half a million years. Any extinction theory must account for the extinctions that occurred in the sea, including some types of clams and coiled mollusks.

The extinction event did not kill all animal and plant life. Many kinds of animals survived, including fishes, frogs, turtles, crocodilians, birds, and mammals. Scientists must take the fossil record and find reasons for all extinctions. 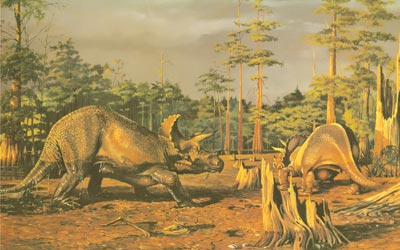 The extinction event that killed the dinosaurs was worldwide. It affected many plant and animal groups, both on land and in water. Dinosaurs were only a small part-the disappearance of other living things was so great that scientists knew about the extinction 30 years before the first dinosaur was described.

The victims of the Cretaceous extinction included dinosaurs, ammonites (mollusks related to the octopus and the chambered nautilus), pterosaurs, and certain plant groups. But many other animal groups, even some large-bodied reptile groups like champsosaurs, were not affected.

The image of the last majestic dinosaurs passing away and leaving a world of shrew-like mammals and cold-blooded reptiles is false. Instead, many of the major modern land animals were already living in the Cretaceous. Dinosaurs shared their last million years with modern creatures. 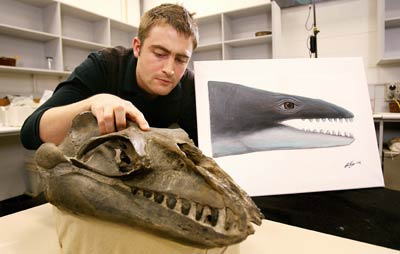 Plants and some animals have a better fossil record than dinosaurs. They also give clues about climate that dinosaur fossils do not. Some marine protozoans (single-celled organisms), called foraminifera, have shells that tell the temperature of the water where the animal lived. By studying the chemical make-up of these tiny fossils, the temperatures of prehistoric seas can be found, and changes in the ocean temperature can be shown. Ocean temperature reflects the climate. This can be used to find out what the climate was like before, during, and after dinosaurs became extinct.

But unlike other scientists, paleontologists cannot go into a laboratory and repeat experiments. They can only untangle history by examining fossils. Unfortunately, there is not enough information and it is often incomplete.

Studying the fossil record can be compared to watching a mystery movie. The paleontologist, though, does not have the whole film. The paleontologist has a film with some parts that are almost complete (every other frame) and others where large chunks (whole reels) are missing. The paleontologist must piece these parts together in order to find out how much of the film is missing.

Paleontologists have come up with a measure of how much of the fossil record is present. The term used is "stratigraphic completeness." Scientists must know how complete the record is in order to find out how long the extinction of dinosaurs took. To use the movie example, it's like trying to find how much time has passed since an event (like a murder) occurred. If all of the frames are present, we know the amount of time. If every other frame is present, we can only say that the event happened within the length of the gap.

Scientists have studied the stratigraphic completeness in the rock formations containing the last dinosaur fossils and in the boundary between the Cretaceous and the Tertiary (the period following the Mesozoic Era). In complete rock units, the best we can say is that dinosaur extinction took less than 100,000 years. In rock units where the sections are less complete, the time frame is longer-even as much as a million years.

In marine rocks (rocks formed in seas or oceans) the record is often more complete. It is here that the earliest and some of the strongest evidence for an extraterrestrial (something from outside the earth's atmosphere) cause for dinosaur extinction has come. Because the record is more complete in marine rocks, the time units studied are much smaller and more accurate. The stratigraphic completeness in rocks deposited in the San Juan Basin (a rock unit in western North America that includes the final phase of dinosaur history) is 100,000 years. In contrast, marine rocks deposited during this same time in Spain allow an interval as short as 10,000 years to be studied. However, these rocks contain no dinosaur fossils.

A second problem with the fossil record is that sometimes fossils can be collected out of place. Recently scientists reported that some dinosaurs may have survived the end of the Cretaceous and lived into the early Tertiary. Workers collected these specimens in rocks above the Cretaceous-Tertiary boundary, with specimens of early Tertiary mammals.

Many paleontologists feel that these specimens were already fossils in the Early Tertiary. They believe that these fossils eroded out of the rocks, and nature reburied them along with the remains of Tertiary mammals. Scientists call this process "reworking" or secondary deposition. It only looks like these animals lived at the same time, even though they lived millions of years apart. Paleontologists must study every specimen carefully. 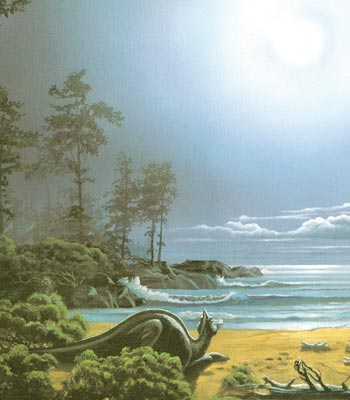 A duckbilled dinosaur watches a comet
Canadian Museum of Nature

Until the recent theories about extraterrestrial collisions, some ideas about the disappearance of dinosaurs centered around mammals beating them in the struggle to survive. One theory suggests that mammals killed dinosaurs because they ate dinosaur eggs. Other scientists have suggested that dinosaurs caused their own extinction. According to this theory, too many meat-eating dinosaurs evolved, eating all the plant-eaters, causing all dinosaurs to die. These ideas have the same pitfall described earlier. They explain dinosaur extinction but ignore the extinction of other groups.

Leigh Van Valen and Bob Sloan offered a more complex theory. During the Late Cretaceous, the continents were moving and major new mountain chains began to rise. Many of the shallow Mesozoic seas dried up. Van Valen and Sloan suggest that this caused the world's climate to change. Evidence from fossil plants at their Montana study site suggests that it got about ten centigrade points colder in the Late Cretaceous. A temperature decline that large would affect the earth. It would have become colder in the mountains, and new plants would have replaced the warm-weather plants.

Van Valen and Sloan have argued that dinosaurs were at a disadvantage in the new forests of coniferous trees. So, they left the mountains and moved toward the tropics, to a better climate. This theory suggests that the dinosaurs survived longer in the tropics than in the mountains. Because plants in the tropics survived, something else must have caused dinosaur extinction in these areas.

One suggestion is that placental mammals (mammals that give live birth and have a placenta) became abundant in the mountains, because they no longer competed with dinosaurs. Later, the mammals escaped these regions and went into the tropics, where they drove dinosaurs to extinction. There are problems with this theory. Some studies of foraminifera (the shells of protozoans talked about earlier) show that there was a short-term warming trend in the Late Cretaceous. But they are right about the long-term cooling trend. There is no evidence that dinosaurs lasted longer in one area than another. Although competition between animals may explain the extinction of many living things at the end of the Cretaceous, other groups, especially the foraminifera, seem to have disappeared without competitors.

Another climate change theory is due to recent research. Some living reptiles, turtles and crocodiles, lay eggs. It was recently found that the sex of their offspring is decided by the temperature of the nest. So if the same were true for dinosaurs, cooling temperatures in the Late Cretaceous may have caused all the young to be of the same sex, so the species would not have been able to continue. 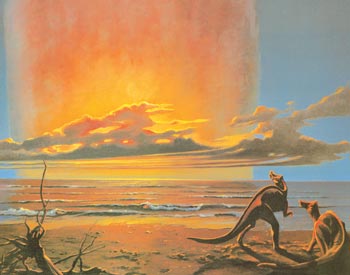 The comet hits earth, sending debris into the atmosphere
Canadian Museum of Nature

One exciting theory is that an extraterrestrial body hit the earth, causing the Late Cretaceous extinctions. Walter and Luis Alvarez and their coworkers found the evidence for this collision during a study of some Cretaceous clay from northern Italy. To their surprise, they found that the clay was rich in the element iridium. Iridium is rare on earth but is more common in extraterrestrial bodies such as meteorites and comets. After further studies, the Alvarezes found the iridium only in a narrow layer. To their amazement, this iridium layer almost exactly matches the Cretaceous-Tertiary boundary. This led them to suggest that a large extraterrestrial body had hit the earth, which caused the extinction of dinosaurs in the Cretaceous.

Since this discovery, scientists have found the "iridium datum plane" (the iridium layer) at the Cretaceous-Tertiary boundary at over 50 sites worldwide. There is other evidence that a large body from outer space hit the earth. For instance, when an asteroid hits the earth, intense heat and pressure develop. The heat and pressure cause changes in the rocks where the comet hit. One of these changes is shock-fractured quartz grains. Bits of quartz (a common mineral in the earth's crust) will break in an unusual way only from intense heat and pressure. The only other place shock-fractured quartz is found is at ground zero of atomic explosions (where a nuclear bomb is exploded). Common elements also act differently when under intense pressure. For example, nitrogen, a usually harmless gas, may have condensed and rained back as nitric acid, a deadly acid rain.

The impact of an asteroid would be a major event in the history of the earth. The iridium layer over the world shows that the comet or meteorite must have been over six miles wide. When it crashed to earth, it would have been traveling 12 miles per second, creating a crater about 100 miles wide.

The dust cloud would have taken weeks or months to settle. First, the temperature on earth would have dropped to below freezing because the dust clouds would have stopped the sun's rays from reaching the earth. This would have harmed the green plants and ocean plankton. Plankton and green plants form the bottom of the world's food chain. They also change carbon dioxide to oxygen.

Late Cretaceous animals might have suffocated because of a lack of oxygen or starved to death. This would have begun with the plant-eaters and carried through to the meat-eaters. After that, the dust cloud would have caused global warming because the heat of the earth would have been trapped. It could not escape through the thick layer of dust in the upper atmosphere.

Since the first Alvarez study, many lines of evidence associated with the iridium layer have all lent support to the contention that an extraterrestrial impact was associated with the end of the Cretaceous. Evidence includes the discovery of an impact structure off the Yucatan peninsula and the discovery of shock-fractured quartz grains. A preponderance of fern spores was also discovered; ferns are usually the first plants to recolonize an area that has been devegetated by a natural disaster.

The dust cloud proposed by the Alvarezes would have killed all plant and animal life-not just dinosaurs. And paleontologists think the extinctions in the marine world lasted thousands of years. This may mean that the marine and land extinctions did not happen at the same time. This has led some scientists to suggest the possibility that many smaller meteors or comets hit the earth over a longer period of time.