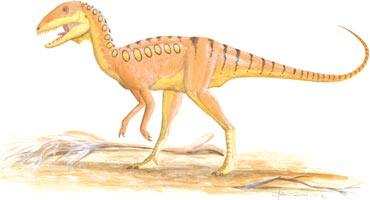 The paleontological expeditions into the Turpan Basin in 1964-1966 turned up several interesting and unusual dinosaurs. In the Subishi Formation, workers discovered the incomplete skeleton of a new, small theropod that was described in 1977 and named Shanshanosaurus huoyanshanensis. An adult animal, it proved to be so different from other Chinese theropods that a new family, Shanshanosauridae, was created for it.

The foot-long skull of Shanshanosaurus had large eye sockets and even larger antorbital fenestrae (openings in front of the eye sockets), which made the skull light. In many ways, its skeleton looks like it may be related to the large theropods such as the tyrannosaurids, but other features suggest that it was related to the dromaeosaurids.

Some scientists have noted that the front teeth of Shanshanosaurus look like the teeth of Aublysodon, and have suggested it may be related.

Whatever its relationships, Shanshanosaurus hunted small animals, such as lizards and mammals. The large eye sockets may mean it was active during twilight, when the light was dim.

Nigersaurus: The 'Mesozoic Cow' With More Than 500 Teeth
Why Did the T. Rex Have Such Puny Arms?
Rare Egyptian Fossil Find Holds Clues About African Dinosaur Migration