Scientists have identified a new type of horned dinosaur with a uniquely decorated neck frill. According to an article in the journal PLOS One, Spiclypeus shipporum lived approximately 76 million years ago in what's the present-day state of Montana in the United States. The fossils were discovered 10 years ago in the Judith River Formation, a geologic formation in Montana rich in rewards for paleontologists, but only now fully examined and described.

The scientists — who call the fossil "Judith" after the place it was found — say that as far as we know, Spiclypeus is a dinosaur unique to Montana, and that while some other species found in the region also show up in Alberta, none has ever been found in more southern regions. This implies that North American dinosaur species that lived during the Campanian Age of the Late Cretaceous Period may have been highly localized, the study says.

Two things set Judith and others like it apart from other horned dinosaurs, like the well-known triceratops. First, it has a unique projection of bony spikes around the rim of its shield, some oriented forwards and some outwards. Second, the horncones above the dinosaur's eyes stuck out sideways from its skull, rather than the more common forward- or upward-oriented horns.

Judith's scientific name Spiclypeus shipporum combines two Latin words for a genus name meaning spiked shield, while the species name comes from the Shipp family, on whose property the fossil was found.

You Haven't Seen Lightning Until You've Seen This Slow-motion Lightning

Why Do Opioids Cause Constipation?

This Explanation Will Change How You View 'Jurassic Park' 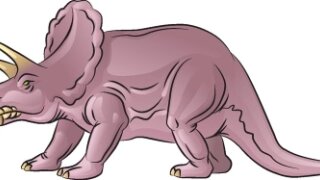 How to Draw a Triceratops in 6 Steps