by Chris Opfer
Prev NEXT
3

The Dunkleosteus had no teeth; it used two long blades to snap and crush its prey. MR1805/iStock/Thinkstock

Call the Dunkleosteus a nasty brute. Call it ugly. Even call it old-fashioned. Just don't call it a picky eater or late to dinner.

This powerful placoderm fish subsisted on just about anything it could get its mitts on: Sharks, fish and even other members of his or her own clan. Without actual teeth, the hungry fish used two long blades to snap and crush its prey. The Dunkleosteus apparently had no problem tracking down its meals, thanks to an enormous frame, speedy swimming and mighty jaw. However it seemed to suffer often from indigestion, not surprisingly [source: BBC].

It's almost as if the Dunkleosteus was designed for destruction. Checking in at more than 33 feet (10 meters) and 4,000 tons (3,600 metric tons), the beast was bigger than a killer whale and at least as fierce. It also featured a series of hard, bony plates around its head that are believed to have served as armor for the battering ram. But the fearsome creature also appears to have been both a lover and a fighter. One of the first species to exist in male and female forms, the Dunkleosteus would have been one of the earliest to mate physically in order to reproduce [sources: BBC, Animal Planet]. 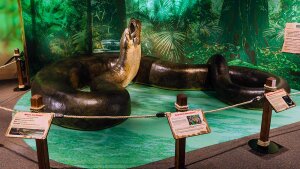