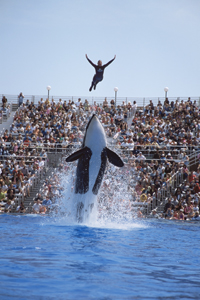 Although Sea World shows may make orcas seem like docile, friendly creatures, they are one of the ocean's most fearsome predators. See more pictures of marine mammals.
Sue Flood/The Image Bank/Getty Images

For centuries, orcas have instilled fear in the hearts of mankind. In all their ferociousness, they've been dubbed wolves of the sea, whale killers, killing demons and fish tigers, to name a few [source: National Geographic, PBS]. Their scientific name, Orcinus orca, comes from the mythical Orcus -- the Roman god of death and the underworld, who was also known as a punisher [source: Britannica]. In North America, the indigenous Haida call them skana, which is a killer demon. The Aleut people call them polossatik, which means "feared one" [source: Roberts].

There are plenty of depictions of people-friendly orcas, such as the movie "Free Willy" and SeaWorld's Shamu. So what did the orca do to get this frightening name? If you've ever seen the 1970s movie "Orca, the Killer Whale" starring Richard Harris and Bo Derek, you may already have an idea. Similar to what "Jaws" did for sharks, this thriller poised orca as vindictive, bloodthirsty savages. Dead-set on hunting down the humans responsible for the death of his mate, an angry orca gobbles up each person, one by one. According to the movie, next to humans, orcas are the only animals that kill for revenge.

Even without rampaging quests for vengeance, orcas are memorable. It's hard to miss their distinctive black-and-white markings, especially the white, oval-shaped patch located near each eye. Pound for pound, a human is no match for a killer whale, since this big beast grows up to 32 feet long (9.75 meters) and 12,000 lbs. (5,443 kilograms). That's roughly 600 times the size of a grown man. And, of course, isolated attacks by captive killer whales on their trainers make even the most apparently tame seem a little more dangerous.

So how does "Orca" measure up to real orcas' behavior? Is their reputation justified? Let's look a little closer at their nicknames and whether orcas live up to the name "killer whale."

Killer Whale: Is It Just A Bad Rap? 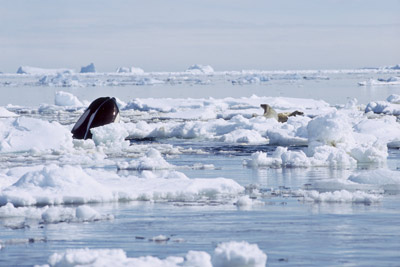 This ice floe may not save the seals for long. Orcas are known to force seals off of floating ice by creating waves or bumping against the ice itself.
Rick Price/Photolibrary/Getty Images

To find out whether orcas live up to the name "killer whale," we need to get a few things straight. Orcas aren't classified as whales. Rather, Orcinus orca belongs to the dolphin family (Delphinidae) and is the largest of all dolphins. Something else may surprise you -- killer whales don't hunt humans. In fact, whalers working in Twofold Bay, near Australia, claimed that killer whales helped them hunt other whales [source: PBS]. The name "killer whale" probably began with sailors and whalers calling orcas whale killers. At some point -- perhaps through an error in translation -- it got switched around to killer whale.

Killer whales' reputation as fierce hunters comes in part because they frequently target other marine animals, regardless of size. Orcas commonly eat whatever's convenient -- seals, sea lions, squid, fish, birds, whales narwhals, beluga and grey whales, to name a few) and dolphins. Imagine the bloody scene of a pack of killer whales devouring something as large and notorious as a great white shark, which is also on the killer whales' takeout menu.

So, how do they do it? Killer whales hunt in groups known as pods. Up to 30 or 40 orcas can be in a typical large pod, but scientists have recorded pods of up to 100. Pods use sophisticated hunting tactics that reflect of the orcas' creativity and intelligence.

Using echolocation -- producing sounds or sonar clicks that are reflected back when they strike an object -- to find their prey, a pod of killer whales works together to reel in the catch [source: Office of Marine Programs]. In one technique, known as carousel fishing, orcas surround a school of fish and spew out bubbles or hit them with their tails to distract and disable them [source: Russian Orcas]. In other hunts, killer whales will pick out a young whale and pursue it relentlessly, trying to prevent it from surfacing for air.

Using another clever hunting technique, killer whales literally jump out of the water and may even temporarily beach themselves just to coax seals into the water. When the frightened seals jump in, members of the pod, lying in wait, attack them. Sometimes, a killer whale will toss one of these seals in the air in order to make it more vulnerable to attack.

In extremely cold climates, killer whales hit floating chunks of ice where animals are resting, trying to knock them into the sea. They'll also attempt to create waves to force their prey off of ice floes. Finally, some anecdotes describe killer whales vomiting up partially eaten fish in order to attract seabirds, which the orcas then gobble up.

In all of these examples, orcas display ingenuity, creativity and opportunism in addition to their natural role as carnivores, so the "killer" moniker fits pretty well. For more information about orcas and their keen hunting skills, explore the links on the next page.