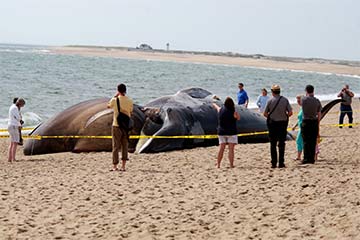 As some unlucky seaside towns have come to realize, disposing of a beached whale is more complex than simply shoving it back in the ocean like a giant goldfish, flushed down an equally massive drain.

First to consider? If the gigantic beast is going to explode. While it smells fishy (sorry, sorry), it's totally true -- beached whales can -- and do -- explode. (Although not very many of them explode without a little help.)

So let's take a moment to pinch our noses and discuss those conditions. What on Earth -- or at least, what in a whale -- would cause a rotten mammal corpse to explode?

A bad case of gas. After the whale dies, gases (most specifically, methane) build up in the stomach and other organs. What usually happens next is that the skin begins to disintegrate, at which point the whale deflates slowly as the gas seeps out [source: AP].

But occasionally – very occasionally --, the skin of the whale (which is quite tough) keeps stretching to accommodate the gas until it reaches breaking point.

A word of warning: Stay away from dead whales, and not just because they reportedly smell like "a jar of bacon grease that you leave out in the sun for days" [source: Arnold]. When you're poking and prodding the methane-filled whale, you're giving it ample reason to explode before it has a chance to deflate naturally. Do yourself a favor and pay your respects from a distance.

If this is making you a little nervous about your own explosive afterlife, you have good reason: Humans also produce methane and other gases after death. But our only explosion risk comes from a casket, too tightly sealed, that wouldn't allow for any circulation. Too much gas buildup, and you have an exploding casket on your hands -- and possibly your hair, clothes and shoes [source: Berko].

Perhaps even more disturbing than an exploding whale is falling into a decomposing whale. One scientist warned that playing too close to a dead whale might result in a chest-deep swim through liquefied innards, which would require rescue [source: Narula].