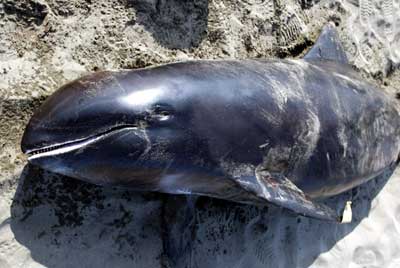 In 1970, the Oregon Department of Transportation encountered a huge problem. More precisely, the agency faced a predicament the size of, well, an 8-ton (7.2-metric ton) whale. That November, a dead sperm whale washed up on the Oregon shore near the coastal city of Florence. If you've ever caught a whiff of just a few ounces of rotting meat in your refrigerator, you can imagine the odor that 16,000 pounds (7,256 kilograms) would emit. For that reason, the task of somehow removing that mountain of flabby flesh was assigned to the DOT.

How did the agency tackle such a gargantuan task? In a feat that has since evolved into an Internet legend thanks to footage posted on YouTube, the Oregon DOT decided that the most efficient way to dispose of the whale was simply to blow it up. Rigging a half-ton (0.45 metric tons) of dynamite to the corpse, it seemed like a sure thing that upon detonation the whale would instantaneously transform into chunks the size of fish sticks that would splash into the ocean.

But DOT officials and spectators weren't so lucky. While they did witness an enormous explosion, the resulting debris flew toward land instead of sea, showering whale guts on onlookers and nearby cars [source: Welch]. Nine years later, when 41 dead sperm whales drifted to Oregon shores, no one pulled out the explosives. Instead, officials performed a makeshift cremation by burying and burning the carcasses over the span of two days [source: Chawkins].

In the case of beached whales like these, funeral proceedings aren't exactly ceremonious. Carcasses hauled out to sea may wash up again, and buried ones can release shark-attracting oil [source: Chawkins]. If the area is uninhabited, experts recommend the simplest option: Leave the body alone and let nature take its course [source: Geraci and Lounsbury]. The main caveat to that, however, is remembering to slice open the abdomen to avoid a gassy buildup inside the whale that could cause a messy eruption [source: Geraci and Lounsbury]. Residents in Tainan, Taiwan witnessed this cetacean surprise in 2004, when researchers were transporting a dead sperm whale that suddenly exploded on a city street [source: MSNBC].

Beached whales aren't sights to celebrate since many species teeter on the brink of becoming endangered. Nevertheless, it's certainly easier for people to deal with when it happens in the mammal's own territory -- the ocean. However sad or unfortunate, whale death benefits other ocean inhabitants because it sparks the beginning of new life.