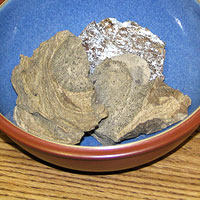 In December 2006, a woman in New York who received a gift of a large mass of some sort of waxy substance began hoping against hope that it would turn out to be that rare "floating gold" of the sea: whale vomit. Her sister sent her the 4-pound (1.8-kg) glob, found on a beach 50 years before, as a holiday gift. No one knew what it was, and whale vomit -- or what some say is really more like a whale gallstone -- was suggested as a possibility. But identifying it as whale vomit, or ambergris, is a daunting task. If it does turn out to be ambergris, the gift could be worth up to $20,000.

Ambergris is an ingredient in fine perfumes. It has what some describe as an inconceivably "smooth" scent. Some say it's musky, earthy, sweet, or simply indescribable. Aside from its unique odor, it has the trait of causing a scent to stick -- in perfumes, it causes the scent to bind to the surface of the skin and stick around, instead of quickly evaporating. Ambergris forms in the intestines of a sperm whale. The whale throws it up because it apparently can't digest it. Scientist have found squid beaks in clumps of ambergris, leading many to surmise the ambergris is something of a protective secretion that protects sperm whales' digestive tracts from the scratching of those hard beaks.

When a whale initially vomits up ambergris, it is soft and has a terrible smell. Some marine biologists compare it to scented cow dung. But after floating on the salty ocean for about a decade, the substance hardens into a smooth, waxy, usually rounded piece of nostril heaven. The dung smell is gone, replaced by a scent that has been famous for hundreds of years, probably more. In addition to its use in the perfume industry, it is said to be an aphrodisiac, a homeopathic remedy, and an excellent flavoring for food.

And it's a collector's item -- ambergris is in short supply. No other whale besides sperm whales produce it, and when the whale burps it up, it's somewhere in the middle of the ocean. Someone finds a piece of the stuff on a beach somewhere every few years, tops. That makes it extremely valuable, but not in the way it once was. Chemists have replicated some of the traits of ambergris synthetically, making it a less necessary component in perfumes. But it's still valuable for its rarity, and certain perfume makers still insist on it. In some countries, including the United States, endangered-species legislation makes it illegal to buy or sell the stuff. Of course, that only makes it more desirable in certain circles. Experts quote the current going rate for ambergris at about $10 to $20 per gram, depending on its quality. But legal issues can make it difficult to find a buyer, depending on where the ambergris washes up.

Identifying the ambergris is the hard part. Most of the time, when people go to an expert with a chunk of a waxy substance they found on a beach, sure they've hit the jackpot, it turn out to be wax or rocks or the petrified remains of an animal.

Ambergris is white, gray, black, or all three. It has a hard, waxy texture and an unusual, pleasant smell. Aside from that, there's not much to go on. But there are a couple of tests that you can perform at home to find out if you should even bring that waxy substance to an expert in the first place.

If the substance passes those tests, the next ones take place in a lab. Chemists will test for benzoic acid and cholesterol in the sample. If the amounts are indicative of ambergris, it will usually be tentatively confirmed as ambergris at this time, although perfume companies will typically order more chemical tests before purchasing the would-be whale vomit. Some experts, though, say that the only test that can absolutely identify ambergris is extensive experience with the look, feel and scent of it.

To learn more about ambergris and related topics, check out the links on the next page.

Are cheetahs clones of each other?
Researcher Paints Eyes on Cow Butts to Deter Lions
A Smart Lemur Is a Popular Lemur