Has a whale ever swallowed someone alive? 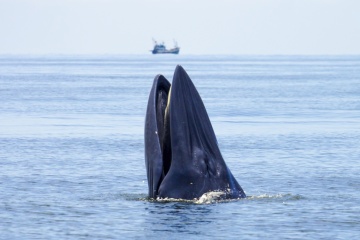 Most whales are very different from the ones depicted in fiction, i.e. Moby-Dick and Jonah's whale in the Bible. In fact, being swallowed is the least of your worries in the sea.
tiverylucky/Thinkstock

It's comforting to think that if you were somehow swallowed by a whale à la Jonah or Pinocchio, you'd simply hang out in his belly in one piece until he eventually spit you back out, unharmed and intact. Unfortunately, the conditions within a whale are slightly less than optimal for human survival, but take heart -- your odds of ending up in this type of situation are pretty low.

In a 2012 article for Salon, reporter Ben Shattuck pored over the records at the New Bedford Whaling Museum Research Library. Despite his extensive research at one of the most comprehensive whaling archives on the planet, he failed to find a single report of anyone ever being swallowed alive by a whale. He found plenty of reports of whalers who were bitten or injured by the creatures, and several who died after tangling with a whale, but none related to swallowing [source: Shattuck].

But what about James Bartley? According to legend, Bartley was part of a whaling crew in the Falkland Islands during the 19th century when he was swallowed alive by a whale. A few days later, his crew managed to capture the whale and cut it open, freeing Bartley. Not only was the sailor still alive, but he had a paler complexion thanks to exposure to stomach acid within the belly of the beast. It's a great story -- and the bleached out details make it seem more plausible -- but if you dig into the tale a bit you'll discover it's simply not true [source: Shattuck]. The story originated in a letter reportedly written by one of Bartley's fellow crew members, who supposedly sailed with Bartley on the Star of the East. Further research reveals that not only was there no one by the name of James Bartley aboard the ship, but the vessel wasn't actually a whaler. Even more telling, the wife of the ship's captain went on record saying that the entire whale story never actually happened and was likely just a hoax by a bored group of crew members [source: Rice].

With their massive mouths, it certainly seems possible that a whale could swallow someone whole, so why is it so unlikely? Consider the whale's anatomy; baleen whales, or whales without teeth, are some of the largest creatures on the planet. Despite their massive size, baleen whales -- which include blue and finback whales -- could never get you into their bellies thanks to their relatively small esophagus. These creatures are designed to eat small prey like sea plankton, and the opening in their throat is only about as large as a basketball, so you'd never make it that far [source: The Naked Scientists].

But what about toothed whales? Sperm whales eat whole squid and seals, so you could easily fit down their throats and into their bellies. However, once you reached the first of the sperm whale's four stomachs, your journey would probably reach a quick end. Not only would the whale's stomach acid make quick work of you, but you'd experience a distinct lack of air on the inside [source: Eveleth].

Of course, you're much more likely to get eaten or maimed as you try to make it past the sperm whale's sharp teeth, which are roughly as long as a large steak knife. Plenty of whalers have tangled with sperm whales and lost their hands or lives thanks to these mean teeth [source: Shattuck].

How did the bald eagle get delisted as an endangered species?
Coconut Crabs: Crustaceans on Steroids
Is a Dead Stingray's Sting Still Lethal?