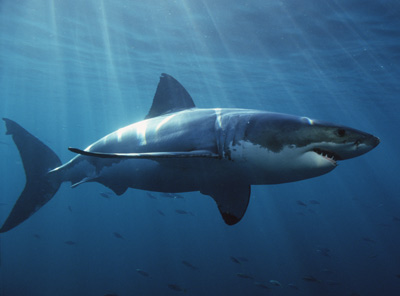 Almost everyone has the occasional daydream of being a movie star. We think about the glamorous parts -- captivating audiences on the big screen, seeing ourselves on movie posters all over the world and raking in the dough and the adulation of our fans. And if we have to play a bad guy every now and then, so be it; those are the juicy parts that win awards.

For the star of "Jaws," though, fame had a flip side, and I'm not talking about Richard Dreyfuss. The great white shark got a taste of fame when it was cast as the villain in the 1975 Steven Spielberg film about a town terrorized by a shark, based on the book by Peter Benchley. But instead of Oscars, the great white got harpoons and hunters. Instead of fame and fortune, the great white became a symbol of fear, a monster. Heck, even its theme song is scary. This shark has been typecast as a crazed and indiscriminate killer.

Is this a fair reputation? Famed marine explorer (and occasional book critic) Jacques Cousteau didn't think so, and he publicly chastised Benchley for his "bad book" [source: Monsters and Critics]. For his part, Benchley expressed regret for writing a book that gave sharks such a bad name and spent his later years campaigning for marine conservation.

When "Jaws" was written, all that was known about great white sharks was based on rare sightings near the surface [source: Carey]. Yet the shark at the center of this scandal has released no public comment and has done remarkably little in the way of spin control. The great white shark is an elusive movie star. Compared to other sharks, we don't know much about the species, although would-be paparazzi have spent many hours in shark cages hoping to catch a glimpse. The great white's elusive nature has only fanned the public's fears, and when it does make the papers, it's usually for attacking people.

Has the great white shark been typecast unfairly? Did its one starring role doom it to an everlasting reputation as the hungry madman of the sea? Or did Hollywood get it right for once? We'll investigate this true Hollywood story by taking a look at shark attacks on the next page.