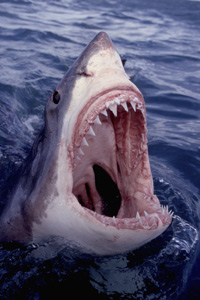 The great white shark has been involved in some of the most chilling attacks on humans. In 1985, Australian Shirley Ann Durdin was torn in two and then devoured by a white shark. Rodney Fox had his lungs and stomach ripped open and required more than 360 stitches in a 1963 attack [source: Rodney Fox]. In 2008, Dave Martin was killed in California when a great white bit off his legs.

Why are the numbers so high? One factor to keep in mind is that great whites are easily recognizable, particularly if they leave a tooth or two in their victims. This means that more attacks are specifically attributed to them than other, less identifiable species [source: Carey]. There may also be a mind-set that great white sharks are guilty in a shark attack until proven innocent. Whether this bias is fair or not, scientists are quick to remind us that the odds of actually being attacked by any shark are very small.

Are humans especially delicious to great white sharks? Probably not, according to scientists who've studied the stomach contents of these sharks. Humans, because of their muscle content, aren't a very good meal for great whites, who crave fatty blubber. Many shark attack victims live to tell their tale because the shark takes a bite, as if to taste it. While this will be small comfort to anyone ever trapped in the mouth of a shark, it may just be a case of mistaken identity. Think about someone lying on a surfboard, their arms and legs out to the side to paddle and kick. From below, this shape might resemble a seal.

The great white is no doubt dangerous, but if you're trying to decide whether to go swimming, it might be worth remembering that elephants are more deadly than great whites [source: Carey]. A common adage in the shark world now is that man is a much greater danger to sharks than sharks have ever been to man. These sharks are hunted for sport and also for their parts, including their teeth and their fins.

But what does the great white shark hunt, if not humans? Find out next.

In 1758, Carolus Linnaeus added a notation to his entry on the great white shark in his taxonomic work "Systema Naturae." He wrote: "It is likely that the prophet Jonah remained in the belly of this animal for a space of three days" [source: Lineaweaver]. Linnaeus was referring to the biblical tale of Jonah, who was swallowed by a great fish but then vomited back out. Although "great fish" has been translated as "whale" in various versions of the Bible, Linnaeus was not the first scholar to link Jonah and the great white based on the scientific evidence of the story. In the 16th century, Guillame Rondelet said that the great white could have swallowed a man and then brought him back up again [source: Harrison]. And the great white was in the right place at the right time to be the biblical culprit; it has been seen in the Mediterranean, and it's been around for more than 11 million years [source: Monterey Bay Aquarium­]