What the Great White Shark Eats 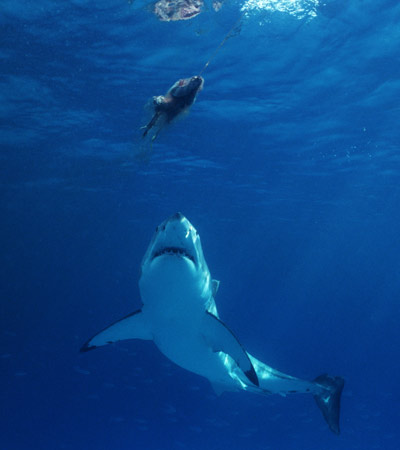 Like some of us, the great white prefers a fatty meal to one with lots of protein. That's why its main prey item is the pinniped, an aquatic carnivore like a seal or a sea lion. As we mentioned, humans are generally too muscular and lean for a typical shark meal, but a seal might be 50 percent fat, representing a very efficient meal for great whites [source: Carey]. They'll also dine on other fishes and occasionally sea turtles. The great white shark consumes approximately 11 tons of food in one year (for comparison's sake, a 150-pound (68-kilogram) human being wolfs down about half a ton) [source: Parker].

While sharks are equipped with impressive noses and ears that help them to hunt their prey, the great white seems to rely most heavily on its sense of vision. It scopes out the water's surface for seals and then approaches them from underwater. One scientist conducted a study in which he presented a great white shark with a plywood seal-shaped board and a square board, and found that the great white made more passes at the seal-shaped board [source: Klimley].

That's a choice between an unfamiliar object (square) and a familiar one (seal), though. Whenever an object was presented by itself, the great white went to investigate -- one reason why swimmers are warned not to go into shark-infested waters alone [source: Martins, Knickle]. The white shark is known for its curiosity and may examine solitary and vulnerable objects to determine if they're edible.

Once the shark has spied something to try, it makes its approach. Scientists have identified several different ways the great white moves towards its prey:

The first bite serves several important functions. Of course, it's designed to disable the prey. Seals are fast and don't give up without a fight, sometimes biting and clawing the shark. That bite starts the process of exsanguination, or bleeding to death, so that the shark doesn't suffer any injury in the course of hunting. Scientists have observed sharks taking that bite, waiting until the pinniped bleeds to death and then returning to feast on the carcass.

But that bite must also appeal to the shark's discerning palate because sharks sometimes reject the prey. Scientists don't know if the choice is based on taste, or if the shark is able to tell in that bite how fatty the meal is, and thus if it's worth the energy expenditure of the hunt.

Let's take a closer look at the great white's bite. On the next page, we'll go inside those fearsome jaws.

For great white sharks, sharing food requires a complicated ritual of asserting dominance. Scientists have observed sharks gathered around a single prey item engaged in bouts of tail-slapping and water splashing; the shark with the most tail slaps usually gets to eat the food in question [source: Klimley]. The tail-slapping, as well as about 20 other observed social interactions, leads scientists to think that great whites are communicating, but they're not sure what each gesture means [source: Martin]. Most movements seem designed to establish rank, but others may serve as a warning of outside danger to other sharks [source: Klimley].